The last series product of the British car-manufacturer Bristol was the 2002 Blenheim. It was a new improvement over the original 1976 603 model, even if it wasn't the last model produced by Bristol.

The Bristol history had ups and downs. Its glory days were shared with BMW engines and even BMW shapes. That was after WWII and some vehicles even featured the BMW kidneys on the grille, but not the badge. Over time, the car manufacturer has decided to switch sides and bought the V8 engines from Chrysler.

In 1976, Zagato was employed to draw a new shape for the aged Bristol 411 Coupe. It retained the three-box design and imagined a silhouette of a 4-seats grand tourer. Its greenhouse was tall enough to accommodate comfortably two adult passengers in the rear. The car featured some modifications between 1976 and 2002, but it kept the same basics. Some slight touches here and there were made to make the car more appealing for its customers. The four rounded headlights and the redesigned grille were part of the change. In the rear, the Opel/Vauxhall Senator horizontally mounted taillights were new.

Inside, there were the same exclusive British materials. The 2002 model featured the same complicated dashboard design, inspired by the WWII aircrafts. The wood trims and the round air-vents were in total disharmony with the Radio-CD mounted on top of the center console, like it was a cheap replacement for the original equipment.

Under the hood, there was the same 5.9-liter V8 unit from Chrysler but upgraded to deliver 350 hp. It was mated to a standard 4-speed automatic transmission. 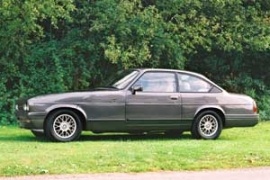