A long time before the four-door coupe vehicles were a fashion, a British car-maker introduced a sloped back, four-door sedan. It was the Bristol 405 drop-head.

After the successful Bristol 404 coupe, the British car-maker decided to offer a four-door version for that vehicle. Since the car was a body-on-frame construction, it was easier to build a longer bodywork based on an extended chassis.

The car was styled by former aircraft engineers. It was sloped and aerodynamic. The front end featured two round headlights incorporated in the front fenders and a third headlamp installed in the grille. Up to the B-pillars, it looked similar to the 404 coupe, but afterward, a pair of doors were added. The 405 was available in two forms - the more common four-door sedan and a much rarer 405 drophead coupe. The latter had a body built by Abbotts of Farnham in 42 units.

The interior featured an instrument panel with seven dials and a two-spoke steering wheel. Apart from a few details, all the cabin was garnished with leather and wood. With its wide front seats, it offered comfort for their occupants, but the rear bench didn't offer too much legroom or headroom.

For the four-door drophead coupe, the car was fitted with a special, 2.0-liter engine that offered 125 hp, which was a lot in 1955. The standard version offered only 105 hp. It was mated to a 4-speed manual. 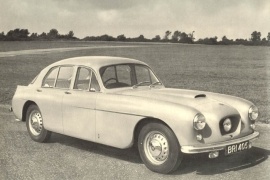