It was the last Bristol that featured the “kidney-grille” from BMW since it was built with the inline-six engine from BMW. It was the successor of the 401 and it still shared some parts with the German car-maker.

Before WWII, BMW and Bristol were linked together. The war broke their alliance and made both sides lose their projects. After 1945, the economy started to move on and the two manufacturers restarted their cooperation. Bristol used much of the BMW technology to build its cars, starting with the chassis, drivetrain, and even the look of the car, which was similar to the BMW 327 coupe.

For the exterior, the 1953 Bristol featured a new pair of headlights on the front fenders. It was a major aesthetic look that could tell the difference between the 403 and 401 models. The aerodynamically shaped bodywork was studied by the Bristol engineers, who used to be the ones to design aircraft and bombers for the RAF (Royal Air Forces).

Inside, some elements resembled the BMW 327. First, there was the same square design for gauges. The linkage to the gearbox was via an angled gear-stick, like in the 327. The dashboard was covered in wood.

The first models were fitted with modified BMW inline-six engines. Later, the 100B series unit, featured more advanced engines, with a short shift gear-stick and an overdrive top gear. 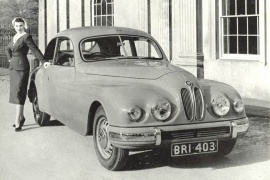