BMW did the last upgrade for the second generation of the 1 Series (F20) in 2017, before changing the generation in 2019.

It is usual for a carmaker to improve a vehicle around the middle of that model's lifespan, and BMW named that upgrade as LCI (Life Cycle Impulse). It's like a small bump to increase the sales and dust-off some systems which are no longer trendy among its customers. The 1 Series was the only rear-wheel-drive premium compact hatchback on the market, and the German carmaker bragged about that until it followed the trend and switched to a front-wheel-drive system in 2019.

Inside, BMW finally introduced the touch-screen infotainment system. While the German carmaker was the first to introduce a combined interface that gathered the audio, phone, and navigation into one unit and named-it iDrive on the BMW 7 Series, it waited a while to offer it with a touch-screen system. The sporty interior look was still the same, with very limited room in the rear due to the high center tunnel needed for the transmission.

BMW kept the three-cylinder engines for the base versions on the engine department, but the customers had a vast choice of engines to chose from. Like its predecessor, the 1-Series featured a rear- or all-wheel-drive system. 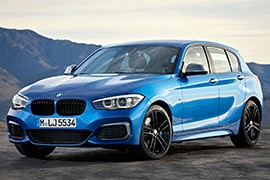