Launched at the 2015 Chicago Auto Show, the facelift for the second generation of the Acura RDX impressed due to its high luxury interior and important safety features.

Acura introduced the first generation of the compact-size SUV RDX in 2006. It was based on the proven platform of the Honda CR-V and it kept it that way to the second generation as well. Its qualities were from the start of a comprehensive package that included safety and comfort features. The second generation came in 2012 and switched from the 2.3-liter turbocharged engines to the smoother 3.5-liter V6, which kept it for all trim levels.

Inside, the driver received a 4.2” TFT display in the instrument cluster. The top trim level, named Advance, received the AcuraWatch safety package as standard, while it was available as an option on the other versions. It included Lane Keep Assist, Adaptive Cruise Control, Collision Mitigation Braking System, and multi-view rear camera with cross-traffic alert.

The engine was revamped and received 6 additional horsepower when compared to the non-facelifted version, reaching to 279hp. More important was the better fuel-efficiency achieved by the 2016 version, due to the new Variable Cylinder Management system, which shuts of cylinders on steady driving situations. The RDX featured a standard 6-speed automatic transmission and front-wheel-drive, while the all-wheel-drive system was included in the options list. 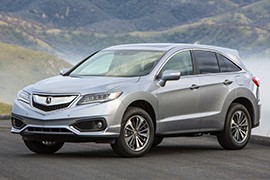