3 Acura NSX Crashes Into Jeep at Chrysler-Dodge Dealership, Gets Its Lights Knocked Out

Acura introduced the 2007 edition of the RD-X model at the New York Auto Show, after previously introducing the concept RDX during the North-American International Auto Show in Detroit. Designed to enter the North-American Premium SUV sector, the new Acura RDX was built on a new global light truck platform and was fitted with a 2.3L DOHC 16-valve in-line four-cylinder engine with i-VTEC valve control developing an impressive 240 hp and 260 lb-ft of torque. Also, the RDX was equipped with a standard 5-speed automatic transmission with Sequential SportShift, a Honda-patended Super Handling All-Wheel Drive and Standard Vehicle Stability Assist system. It was available with a choice of two packages - base and technology - each featuring some impressive new features (HandFreeLink, Multi-Information Display or Navigation System with Voice Recognition). The RDX was based on a newly-developed Advanced Compatibility Engineering body structure, designed to minimize the cabin deformation in case of a collision. This model was assembled in Marysville, Ohio. 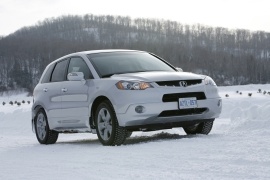