Ten years after the original model went extinct, a new generation Acura NSX supercar debuted at the 2015 North American International Auto Show, being developed and produced in the US to bring a new experience in its segment.

Closely following the lines of previous concepts, the 2016 Acura NSX amazes through sharp angles at both ends, which perfectly combine with the smooth surfaces that make the cockpit. This denotes a high level of precision and performance, making the car look dynamic even at a standstill. Naturally, the NSX's design is matched by the advanced underpinnings, using lightweight materials, third-generation magnetorheological dampers, double-joint front suspension, multi-link rear suspension, carbon-ceramic brakes and more. Unlike its predecessor, the second generation Acura NSX is powered by a hybrid unit, comprising three electric motors (two in front, one at the rear) and a twin-turbocharged V6 gasoline engine. The front works independently of the rear, which is controlled by a 9-speed automatic gearbox. 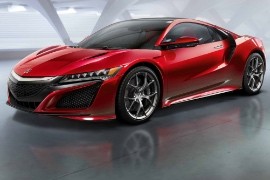