3 Acura NSX Crashes Into Jeep at Chrysler-Dodge Dealership, Gets Its Lights Knocked Out

Acura introduced the second generation of the Integra in 1994 and pushed the car's limits even farther, resulting in one of the best front-wheel drive vehicles ever made.

This second generation of the Integra featured a sports-oriented chassis, rigid bodywork, and powerful engines for their displacements. But things went even wilder later with the small, two-door Integra when the carmaker introduced the GS-R and the Type R versions.

Its design was simple yet easy to recognize. Its dual round headlamps design of the front end replaced the pop-up headlights used on its predecessor. The badge was mounted between them, while the grille was moved lower, in the apron. From its sides, the ascending beltline and the sloped-down greenhouse created the image of a sporty vehicle. Finally, the back of the car sported wide taillights.

Depending on the version, the car featured bolstered front seats and a small split-folding bench for two in the back. The dashboard sported a big tachometer and speedometer flanked on the sides by the fuel and temperature gauges. At the same time, the center stack hosted the stereo and the HVAC control system if the car was fitted with that. When the Integra Type R came on the market in 1997, the AC unit was eliminated to save some weight. Moreover, that version didn't have a sunroof or a manual transmission in the options list.

Under the hood, Honda installed a choice of three 1.8-liter engines. The base model was mainly tuned for fuel efficiency and was available with a four-speed automatic transmission. The other two were only fitted with a five-speed manual. All of them featured disc brakes in all corners, double-wishbone suspension up front, and multi-link out back. 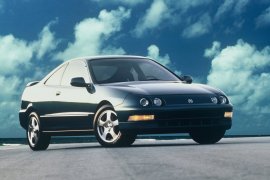