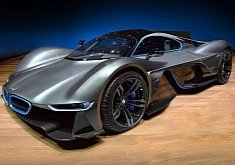 27 Jul 2021, 13:04 UTC / Space Hub Sutherland is set to become the first satellite launch in the UK, that could launch the first rocket from British soil, in the near future.

This U.S. Giant Satellite Is a Record-Breaker, Completes Over 1,300 Experiments

6 Jul 2021, 14:51 UTC / Speculative exercise explores what would happen if 20,000 satellites (Starlink constellation included) fell back down to Earth

5 Jul 2021, 11:23 UTC / Only 3 years left until a potential asteroid impact, and the fastest solution to prevent it would involve turning commercial satellites into "rams"

24 Jun 2021, 12:26 UTC / Airbus' Pleiades Neo satellite sent the first imagery of places around the globe, since it was launched as the first of a new-generation constellation

16 Jun 2021, 14:44 UTC / On May 18th, this lucky passenger captured the moment an Atlas V rocket was launched into space from Cape Canaveral in Florida.

15 Jun 2021, 10:20 UTC / The world's first wooden satellite took a slefie at the right moment. After reaching its maximum altitude in the upper atmosphere, the carrier ballon exploded

2 Jun 2021, 15:12 UTC / Rocket Lab received aproval from FAA to resume its satellite launches after its mission failed to deploy the cargo into the orbit.

28 May 2021, 09:43 UTC / Airbus is building the second-generation, polar-orbiting meteorological satellites that will raise the bar for weather forecasting

SpaceX Is Literally Putting a Dogecoin on the Literal Moon, the DOGE-1 Satellite

29 Apr 2021, 15:40 UTC / SpaceX deployes an extra set of 60 Starlink satellites in orbit, scientists are increasingly complaining that they cause issues with their observations

22 Apr 2021, 07:08 UTC / The WISA WOODSAT satellite will be launched into the orbit by the end of the year and will offer a look into space exploration beyond fossil fuels

2 Apr 2021, 14:23 UTC / Pandora is a small satellite that will be used to observe both planets and their stars in visible and infrared light for long periods once in orbit

22 Mar 2021, 15:17 UTC / NASA and SpaceX agreed on who will have to shift position in orbit in order to avoid collisions in space between satellites and spacecraft

20 Jan 2020, 14:59 UTC / Officials say they’re saving money by using the current Army uniforms for the new one, but the Internet is not buying it: who needs camouflage in space?