Mercedes-Benz GLA 220 CDI 4Matic Gets Reviewed in The UK

Home > News > Classics
Gabriel Brindusescu
As cool as instant torque might sound, seeing an old musclecar doing a burnout without hearing the powerful growl of the engine is as freaky as your worst nightmare. Will we be able to adapt to this sorcery in the electric future?
7 photos

If you recall, two motoring enthusiasts going by the names of Mitch Medford and John Wayland, put together Bloodshed Motors hoping to do what racing legend Caroll Shelby did for the Mustang.

Only that they chose the “green” way to do it, as today’s industry is starting to slowly choke high-displacement engines and replace them with hybrids or even electric motors.

Last time we reported on the guys, they were transforming a classic 1968 Ford Mustang into a pure electric beast. Well, they did it and you can see that in the new video they posted on the internet.

As they promised, the Mustang looks exactly as it came off the assembly line, only that it has bright green stripes and it’s called “Zombie 222”, cleverly symbolizing something that is still alive and kicking despite having its heart and soul ripped and thrown to the dogs.

Under the hood it has two 11-inch electric motors and a Gear Vendors overdrive unit which get fed up by a 40 kWh battery pack. The system produces the equivalent of 750 hp and a total of 1,800 lb-ft (2,440 Nm) of torque.

How brutal the system is can be seen in the video bellow, where it manages to perform a sweet burnout, minus the classic petrol-guzzling noise. It’s just like a huge RC car that you get to ride in - interesting but misses the point of a musclecar by a mile. 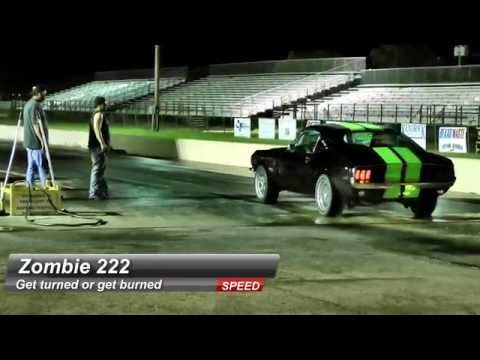