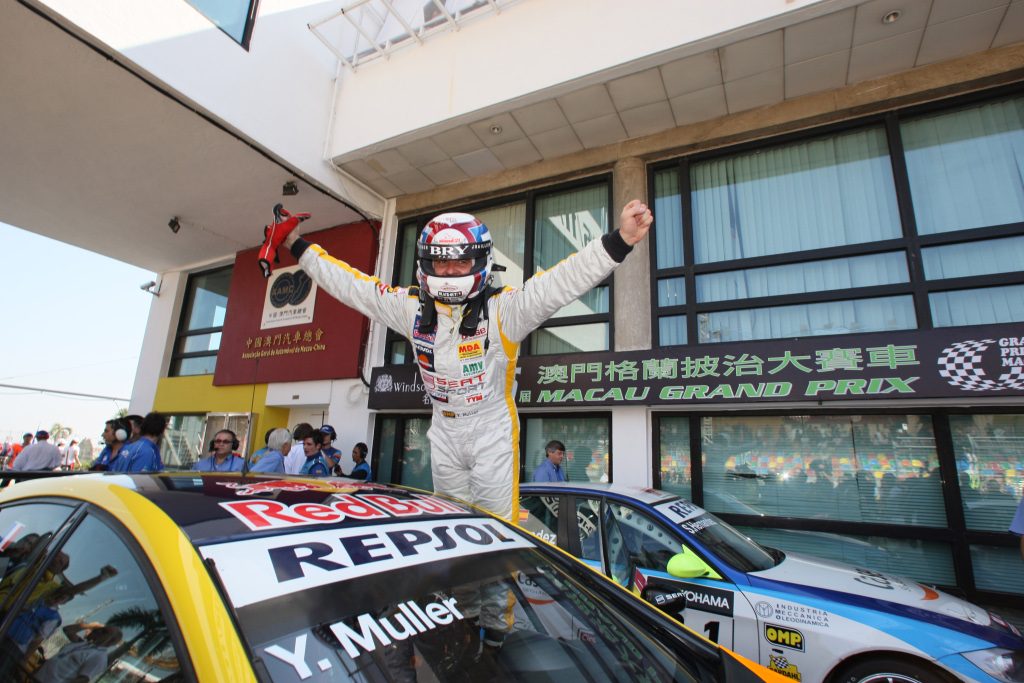 Yvan Muller secured his first ever world title inside the FIA WTCC after a thrilling race in Macau. Despite heading for the season finale with a 14-point advantage over title rival and Seat teammate Gabriele Tarquini, Muller was still under a lot of pressure on Sunday as he was challenging for his maiden title in the series.

But the Frenchman took care of that from the weekend's very first race, as he worked hard to get enough points on the scoreboard to deny Tarquini a run for the title in the second race of the day. Following Rob Huff's shunt after a few laps and Rickard Rydell's engine problem in the early part of the race, Muller advanced into 3rd place.

Though challenged for the podium by both Buff and BMW's Augusto Farfus, Muller stayed strong and maintained 3rd place until the finish line, behind Chevrolet's Alain Menu and reigning WTCC champ (not for long, though) Andy Priaulx. With Tarquini unable to outscore his teammate in Macau's first race – as he finished 7th overall – the title was mathematically in Muller's back yard.

The second race only counted for the statistics, as Huff avenged his run in Race 1 and powered to win, followed by the already-champion Muller and BMW's Priaulx.

“One year ago exactly I came here and I was very sad. Finally one year later I am here on top of the world. When you lose a race you are remind it for weeks and months, and even more. When you win, you forget quite quickly, but I shall remember this for a long time. You have to do your best to win the title, but at the same time you have to have a great team to give you that opportunity.”

“SEAT gave me that opportunity. I also have to say thank you to my mechanics and to all my team mates, because we all progressed together and work together during the season. And even yesterday we were sharing some information with Gabriele, and that is quite fantastic in a team. We have a real team spirit at SEAT,” said Muller after the race.

The Alsace-born driver therefore ended Andy Priaulx' supremacy in the sport, while also setting Seat's maiden 1-2 in the championship. The Spanish team had managed to secure the manufacturers' crown from as early as two weeks ago, following the Okayama event.