Gabriel Nica
The BMW 1M Coupe became more than what even the Germans imagined at first; we’re pretty sure. Nowadays, if you want to buy one of the remaining cars out of the 6,331 units they built in total you might find yourself in the position of paying more than when they were new.
1 photo
What I’m trying to say is that the demand for these Coupes is still pretty high because there are simply too few around. In their stock guise, they are brilliant to drive, despite whatever bad thing people might say about them.

Sure, the N54 twin-turbo inline 6-cylinder 3-liter engine is not the most reliable in the world, its overheating problems being well known but then again, that can be worked around.

Tuners have been getting incredible amounts of power and torque out of it in the past and coupled with the perfect 50:50 weight distribution, the brilliant rear diff and the manual gearbox this thing has, some actual engineering jewels came to light.

That being said, what we have in the video below is a heavily tuned (Stage 3) 1M Coupe from a German tuner called Aulitzky Tuning. The car is supposedly putting down more than 500 HP, and we guess some added oil coolers, intercoolers a new intake and exhaust are to blame amongst others.

Considering that the stock car has only 340 HP and up to 500 Nm (369 lb-ft) of torque to play around with that’s a serious improvement, close to 50 percent and the results are rather easy to see. In the video below you’ll witness just how playful the rear end is when pushed to the limit and just how fast the car can accelerate to ridiculous amounts of speed.

What do I mean by that? Well, let’s just watch what happens when the 1M Coupe in the footage below accelerates to 270 km/h (168 mph). 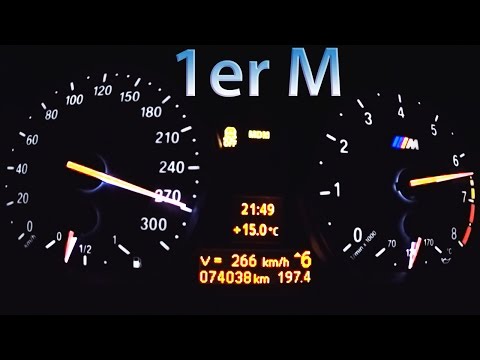