Home > News > Videogames
17 Feb 2022, 00:38 UTC ·
by Cosmin Vasile
The next few weeks will be incredibly busy for racing game fans, as many high-profile titles are coming out to tickle that addiction for speed. GRID Legends is the first important game set for release this month, followed by Gran Turismo 7 and Chocobo GP, which will be released in the first half of March.
6 photos

For the second part of March, we have another blockbuster, Monster Energy Supercross – The Official Videogame 5, which is scheduled for release on March 17, on PlayStation 4, PlayStation 5, Xbox One, Xbox Series X/S, and PC (via Steam).

Coincidently, today marks exactly one month until Monster Energy Supercross – The Official Videogame 5’s launch, so what better way to celebrate that than watching some gameplay footage. Developer Milestone has just released a gameplay trailer that shows a big chunk of a Supercross race, as well as some additional details about the game to go with the video.

Veterans of the series will be happy to know that the next entry in the Monster Energy Supercross franchise is supposed to bring enhanced gameplay thanks to a few important improvements to the bike control, giving more freedom and precision.

The team at Milestone also confirmed that they have revised the steering for a more precise guide in all phases on the ground. Another important gameplay improvement touches the suspension system and drift management, which have been refined to allow players to be more aggressive without falling by opening the throttle at the end of the drift.

On the other hand, newcomers to the series will find that Monster Energy Supercross – The Official Videogame 5 has a little bit of something for them too. The Future Academy is a friendly tutorial meant to guide new players through the mastering of the Supercross basics. Watch the gameplay trailer below and add the March 17 date to your calendars. 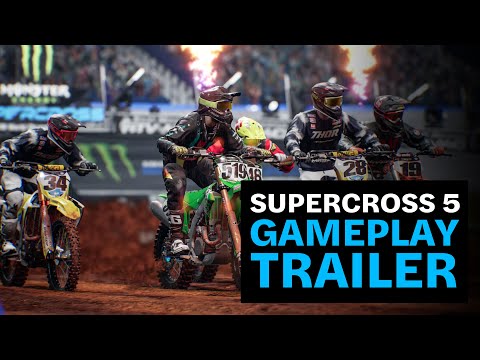