Alex Oagana
Earlier we showed you a trio of camouflaged Mercedes-Benz AMG GT (C190) models being benchmarked against the Roadster version of the soon-to-be-demised SLS AMG and none other than the bonkers Porsche 911 Turbo S (991).
1 photo
Original reports were saying that since the AMG GT is using a shortened version of the aluminium platform used by the SLS AMG it will be rear-wheel drive only, just like its bigger brother.

A report which appeared last Fall informed us that the S-Model variant of the new sports car might sport the AMG-tuned 4Matic all-wheel drive system in order to put the final nails in the Nissan GT-R and Porsche 911 Turbo coffins.

At the time, we took it with a pinch of salt, but there are three important pieces of information that might make us reconsider our opinion on the matter:


We don't have any official confirmation yet, but it wouldn't be impossible for the engineers in Affalterbach to make the transaxle layout work with all-wheel drive, just like Nismo engineers did with the Nissan GT-R, which uses the very same layout.

We will keep you posted when more information pops up, which is sure to happen as the AMG GT's Summer release date is approaching fast. What do you guys think about these two mild powerslides? 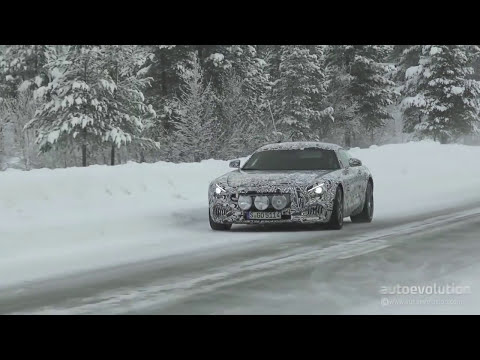