4 A Dose of Pure Australian Muscle: A Rare and Famous 1977 Holden Torana A9X

If you’re on the market for some non-American muscle, you can’t go wrong with a classic Torana. Seeing how this one is both in impeccable condition and very rare, you might as well call this a triple win.
13 photos

The Australian Muscle Car Sales is a good place to go to quench that thirst for non-American muscle. And here it is again, delivering a very rare Torana LX SS Hatchback dubbed a true collector’s piece. It is one of the 10 SS Hatchbacks ever produced in this particular color (Tuxedo Black) and, of these, one of the three with manual transmission.

Holden made the Torana between 1967 and 1980, offering a variety of models for the same platform. Some of them have recently sold for a lot of money, both because they’re highly collectible and because they happened to have been raced by famous figures. This one wasn’t raced, so it’s comparatively cheaper.

It is, however, in as-new condition, having undergone a rotisserie restoration in 2018. As noted above, it is one of three models of LX SS Hatchback in Tuxedo Black made with a manual transmission, and it still has the original 5.0-liter L31 V8 engine, though restored to stock. The carburetor, gearbox, and differential are also original, as is the interior in Slate Black Golf Ball trim.

The exterior has the A9X option with flares, hood scoop, chrome bumpers, and widened A9X-style GTS wheels. For residents of New South Wales, Australia, the Torana comes with custom number plates, SS L31 – a lovely touch for a true connaisseur.

Now on its second owner, the car comes with factory-installed radio, cassette player, and dealer-fitted AC, though the latter is not installed. A letter of verification from GMH is included, as is the original dealer sticker. The listing makes no mention of how many miles it has on the clock, but photos show almost 97,000 km (60,273 miles). For all the above, the asking price is AU$185,000, which is roughly US$145,600. 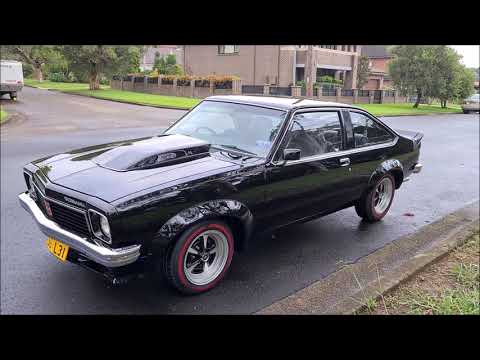