Designed as a sports-car dressed as a blue-collar worker, the Ute was Australian's Chevrolet ElCamino and managed to gather a crowd around it.

Holden created the Ute as a regular working vehicle, a pickup for street use with a limited loading area and fuel-efficient engines under the hood. But that was only a part of the truth. It is hard to believe that someone would use a 285 hp pickup vehicle to move its gardening tools around town. In 2013, Holden introduced the VF platform-based Ute and kept it until 2017 when the car left the assembly lines.

The Ute was based on the same platform as the latest Commodore lineup. It sported a new front fascia with rounded, angled headlights and a big hexagonal "mouth" in the lower bumper area. The base versions didn't show any muscles or exaggerated styling, but the front spoiler was not standard for utility vehicles either.

Inside, the European style dominated the dashboard and its binocular instrument cluster. The infotainment system featured a 7" touch-screen above the center stack, like in Holden's European cousins (Opel and Vauxhall). The aluminum inserts (silver plastic) and the thick steering wheel completed the car's sporty image, while the high-bolstered seats kept its occupants in place during hard cornering.

Under the hood, Holden offered a choice of two engines for the Ute. While the small, 3.6-liter version was for those who didn't want to tear up the tarmac, the 6.2-liter LS3 under the SS version was clearly the one that turned heads on the streets. 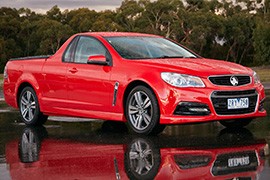