1 Ex-Mayor Drifts Ferrari In a Russian Mall, He Says It Was in Honor of an Artist

Vengeful Husband Fills Wife's Car With Concrete, This Looks Like An Easy Divorce

Every couple in the world has problems every once in awhile, but they say that communication and understanding are essential to solving them.
11 photos

The Russian man that is in the top photo of this article went past those options when he hired a cement truck to pour concrete in what is described as his wife’s car.

While we appreciate that he did not resort to violence to avenge his frustrations on his spouse, we cannot help mentioning that his “solution” did not help anyone.

According to reports that covered the situation, which appeared across the world because he filmed the entire concrete pouring process, his wife made him lose his temper after she changed her surname to gain access to a supermarket promotion.

The latter promised that whoever applied and legally changed his or her last name with the one of the company would receive $890 per month, which is the equivalent of 50,000 Russian rubles.

In an amusing twist of irony, the supermarket is called “Veniy,” which reportedly means “Loyal” in Russian, but Google did not manage to translate it for us that way.

Regardless, it is claimed that the spouse did not inform him of the decision, and he found himself in the situation without even knowing her intentions.

The man told reporters that the surname change was the last straw in their relationship, and he felt the need to get revenge. He knew that his wife was proud of her automobile, which was kept spotless inside and out until the incident occurred.

Just like Autoblog has noted, this might just be a clever marketing scheme devised by the Russian supermarket chain to promote itself on a small budget. After all, the car was parked in front of the shop, and the entire clip has the brand name visible for most of its duration.

Regardless of the reason why someone would want to get even with another person, damaging their car is a cowardly act, similar to vandalizing his or her house. 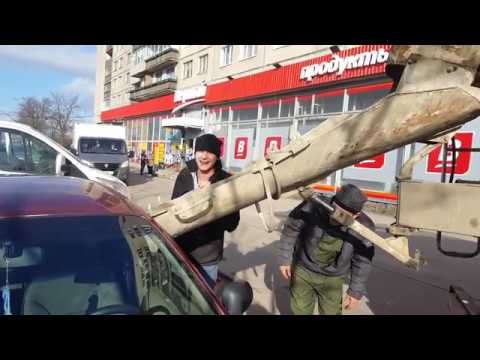