1 EPF 13 U.S. Navy Ship Will Have $44 Million Worth of Autonomous Capabilities

3 US Navy Invests $750,000 In Developing Cyborg Locusts To Sniff Bombs

Home > News > Military Bits & Pieces
Otilia Drăgan
Anti-missile tests and military exercises are great for demonstrating a ship’s combat skills, but shock trials are the ones that ultimately show whether it’s built to be able to withstand battle conditions. USS Gerald R. Ford just went through its first test of this kind, as part of the Full Ship Shock Trials (FSST).
13 photos

Currently in the shock trials phase of its development, USS Gerald Ford (CVN 78) is getting closer and closer to its first deployment. These tests are an important stepping stone, meant to prove that the ship is literally tough enough to handle powerful shocks that simulate battle conditions.

The Navy announced that Ford’s first shock trial was conducted on June 18, off the U.S. East Coast, where explosives were blasted near the aircraft carrier, to test its response to the shock. Imagine experiencing a 3.9 magnitude earthquake, because this is how the nearby Florida event was registered by the U.S. Geological Survey. Of course, this controlled explosion was conducted in compliance with all formal safety protocols and environmental requirements, the only thing at risk being the ship’s structure.

Although the U.S. Navy has conducted other FSSTs in recent years, the latest ones tested being the Littoral Combat Ships USS Jackson (LCS 6) and USS Milwaukee (LCS 5) 5 years ago, it’s for the first time since 1987 that an aircraft carrier undergoes these types of trials. So, this is a significant milestone both for the Navy and its new generation of carriers.

As the Navy’s most advanced aircraft carrier today, Ford was specifically designed with the latest computer modeling methods in order to have the required endurance, and the FSSTs will show whether or not it’s truly ready for deployment. Larger than its predecessor, the Nimitz-class, and designed to enable more than 200 sorties a day in crisis situations, the USS Gerald Ford is a beast and future trials will most likely confirm its status.

Further shock trials are scheduled by the end of this summer, after which the aircraft carrier will enter a maintenance period before its first deployment. 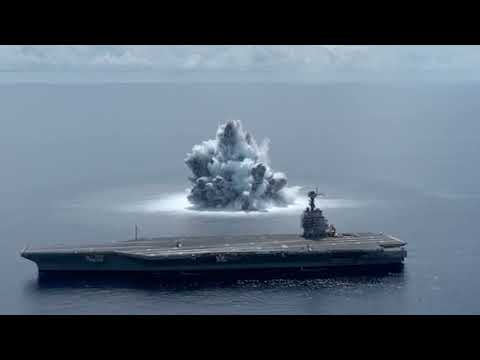