2 Electric Buzzsaw Boss Hog Is the Chopper of Our Modern Times, Stylish and Affordable

3 Minimalist-Looking E-Moped Has a Magnesium Frame, Claims to be the World's Lightest

4 Most-Awaited E-Scooter in India Finally Goes on Sale, Has a Range of 112 Miles per Charge

5 Minimalist-Looking Komeet X9 E-Scooter Promises a Range of 62 Miles on a Single Charge
Car video reviews:
Up Next

Rare Studebaker Avanti Found in a Shed, Gets Saved from the Crusher

Unagi's Latest E-Scooter Claims to be the Smartest on Earth, Is Also Light and Powerful

When an e-scooter manufacturer calls its product “the smartest scooter on Earth,” you just have to see what that’s all about, which is probably what the company aimed for, with such a description. So kudos to Unagi’s marketing department. Model Eleven is the latest two-wheeler developed by the company and it plans to revolutionize urban transportation.
10 photos

While some think of Unagi as being the “state of total awareness,” as believed by the Ross character in “Friends,” others simply think about the freshwater eel (which is the Japanese meaning of the word). And yet another category associates the word with those fancy, high-end wheelers that are touted as the Teslas of electric scooters.

Unagi is a brand that’s made quite a reputation on the micro-mobility market with its Model One e-scooter, which was launched three years ago and has sold in tens of thousands of units worldwide, as boasted by the company. Now Unagi introduces the Model Eleven, claiming to have reinvented electric transportation.

The Model Eleven electric scooter is described as being light, portable, powerful, comfortable, and of course, extremely smart. It is made of a Switzerland-designed long carbon composite, and Unagi boasts of the vehicle being the lightest full suspension e-scooter, weighing 32 lb (14.5 kg), with other such vehicles weighing more than 45 lb (20 kg).

Unagi’s scooter comes with an integrated audio system with Google directions, and scooter-first indications are being offered via the dedicated app, compatible with both iOS and Android. In order to use the feature, you have to select your desired destination, place the phone in your pocket and let the app do its thing. It will then communicate with the system in the handlebar and offer verbal turn-by-turn directions, as well as signals on the display.

There’s also an integrated sensor that helps you avoid collisions by detecting objects in your periphery and providing warnings, both audio and visual ones. You can get the wheeler with or without the Crash Assist A.I. feature.

Another useful sensor is the motion one which triggers an alarm in case someone tries to steal the scooter.

The Model Eleven has a swappable battery design, so you can buy extra batteries and carry them with you, which is not a bad idea if you want to boost its standard range of 15.5 miles (25 km). In addition, its dual-motor design delivers impressive torque and gives the scooter superior hill-climbing capabilities. It has a maximum power of 1000W and a top speed of 20 mph (32 kph).

Unagi’s Model Eleven is now available to pre-order on Indiegogo, with deliveries scheduled to start in 2022. You can get the electric scooter in five colors. If you opt for the version with Crash Assist A.I., it will cost you $2,860. The version without object detection is priced at $2,440. 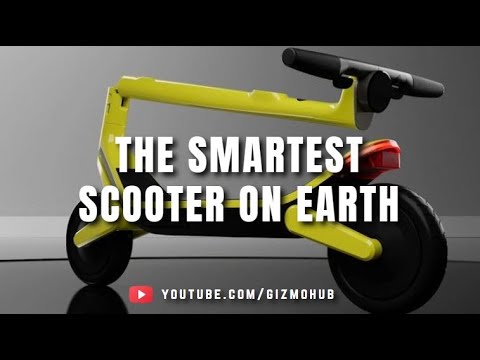