Shawn Davis, the cordial host of the AutotopiaLA YouTube channel doesn't necessarily delve deep into the truck side of the custom market. But whenever he does, we can be sure that he's got a great reason to do so. This time around, it could be the fact that it's summer, or maybe because of the presence of this V8-swapped Jeep. Built by the owner on a budget, it still turned out as a fun little burnout-prone SUV.
36 photos

What happens when someone that works with dad running a little shop called GasRatz Customs gets hold of a beat-down six-cylinder 1989 Jeep Wrangler? Well, it could turn into an “ugly duckling” of an SUV like this yellow example we see here in the latest video from the AutotopiaLA YouTube channel. Or not. But we certainly prefer the version where it does a lot more.

According to the story shared by the owner, we’re dealing with a turnkey custom build that was created in the garage with a lot of help from friends and family. It’s a fun little ripper, for sure, even when standing still. The summer vibes are great, but the secrets are even better. Apparently, it all started with the faltering six-cylinder and five-speed combination that was ripped out after failing the owner in the worst possible way.

As such, a General Motors-built LS engine of the LM7 variety (a 5.3-liter Vortec, which usually varies between 270 and 295 hp when stock) made it way under the hood. It doesn’t give out an outstanding amount of power, as the owner reckons that after all the tinkering, it can deliver around 400 ponies to the rear wheels when hooked to a Turbo 350 automatic transmission.

The power is sent exclusively to the rear wheels, we need to mention that. During the build, the Wrangler lost its 4x4 abilities and now has no front differential, although it dully compensates with a line lock! Yes, that’s right, it’s a wheelspin-loving SUV. By the way, some of the technical stuff gets explained from the two-minute mark and up to the 5:35 mark when it’s time for a drive.

And that’s the moment everyone was eagerly anticipating, including some Chevy truck friends who probably heard the little Jeep coming out of the garage with the exhaust cutouts open and decided to show off a little (check them out at the 6:25 mark). Of course, the Wrangler wasn’t going to decline such an invitation for some wheelspin fun, and after the driver swap, it’s time for a great cloud of smoke at the 9:20 mark. 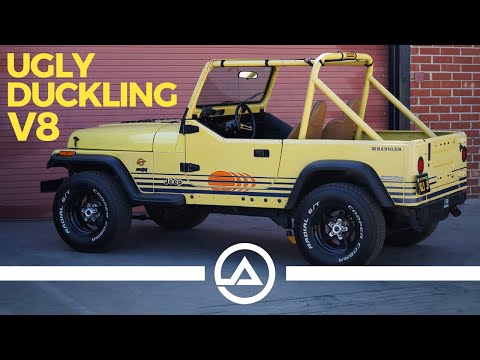