Aurel Niculescu
You know when someone is really passionate about cars by the way they talk, walk, dress up and set up their garage. But a car freak is even more obvious when the latter contains all sorts of cool rides, as if we’re getting the automotive version of the “Ali Baba and the Forty Thieves” cave of wonders.
60 photos

It’s exactly the sort of “One Thousand and One Nights” amazement we feel when Shawn Davis and his crew from the AutotopiaLA channel on YouTube showcase a little more of “Dave’s Place,” the setting used for the static portions of the presentation for the latter’s 1968 Ford F-100 Classic Trucks Magazine show build.

Yes, we know there’s an interesting story brewing about the Bumpside (there’s a before shot as well as a “Bmpside” license plate to make sure everyone knows who’s who) but let us just collect our jaws off the floor first. We just dropped them twice, first when viewing AutotopiaLA’s latest episode (embedded below) and secondly when sifting through the attached gallery.

In there, we caught glimpses of just about anything, from classic Rollses to first-gen Mustangs, middle-aged Lexuses, hippie VWs, or modern Aston Martins and Audis (and more). Now, with that out of our system, let’s refocus from “Dave’s Place” to the F-100 at hand.

The owner’s story began somewhere in 2008 – 2009 when the 1968 Bumpside was taken for a new lease of life under the patronage of a professional fabricator for Classic Trucks Magazine. Details are a little convoluted, because it’s unknown if the truck was actually finished then or after it was sold to an Arizona fan in 2009.

Apparently, the truck was unused for a decade but last year it finally came out of storage and the owner delivered the finishing touches – the 2018 Ford F-150 Raptor Avalanche Gray paintjob and the neat interior (which can be seen from the 4:18 mark) that includes Mustang seats with TMI covers, among other great details.

This is one of those instances when the custom truck isn’t a personal project and instead it’s the ride that someone drooled all over and luckily found it on Bring a Trailer years later. It’s exactly what happened here, and now the ‘68 calls “Dave’s Place” home after the owner paid almost $51k for it.

Not a bad deal at all, considering this is clearly a no expense spared job, with the F-100 now sporting very clean lines (the bumpside is nowhere in sight) and a very neat Blue Oval engine swap under the hood.

According to the information from the owner it’s a Ford Racing 4.6-liter V8 Mustang / Whipple supercharger crate engine combo that was directly provided by the company back in the early days of the build to try and promote Ford Racing’s then new line of crate engines, which “clearly didn’t take off.”

On the other hand, from the 4:50 mark when the driving portion of the presentation kicks off, we can see the F-100 is a very nice, loud ride that handles itself pretty well (probably thanks to the Fat Man Fabrications custom chassis and 4-link rear suspension).

That’s great, even though “it would be nice to have another 100 horsepower,” according to Shawn, on top of the 380 ponies it makes from the factory – which equals to some 346 hp to the rear wheels according to a recent dyno test. 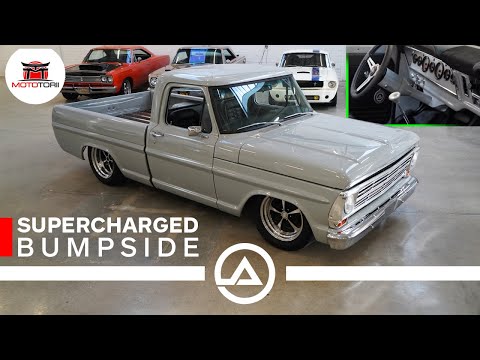