Jeep dust-off the Wagoneer and Grand Wagoneer nameplates and re-introduced them on the market in 2021, three decades after the last original Wagoneer rolled-out from the assembly lines.

But Jeep did that to match the Cadillac Escalade, and Lincoln Navigator offers on the market. Maybe someone from the Stellantis (the new corporate name) considered that it could make a real competitor for the big, luxurious SUVs offered by the competition. And it did it. The Wagoneer and Grand Wagoneer were top dogs in the luxury market.

Jeep built the Grand Wagoneer on top of an entirely new platform. It was a body-on-frame construction, and the bodywork looked intimidating with its chromed, seven-slats grille at the front. As expected for a premium SUV, it featured standard LED headlights, fog-lights, and any other lights on the vehicle.

Inside, the Grand Wagoneer showed an impression of luxury and comfort. It showed up to seven big screens on the instrument cluster, two on the center stack, one in front of the side passenger, and another three for the middle row. Jeep made the wood-trims from American satin walnut, and it sculpted the “Grand Wagoneer” name in it. Unusually, the steering wheel sported a small piece of wood under the airbag container. The wide, leather-wrapped front seats featured massage, heating, and ventilation. Its second-row was available with either a bench for three or two captain seats, which could rotate 180 degrees. In the last row, the Grand Wagoneer offered another three seats on the leather bench.

Stellantis developed a new platform for the Grand Wagoneer, including an air suspension in all corners with four adjustment levels. Even though most of them never saw real offroad situations, the carmaker installed various transmission settings, from sport to snow, sand/mud, and rocks. 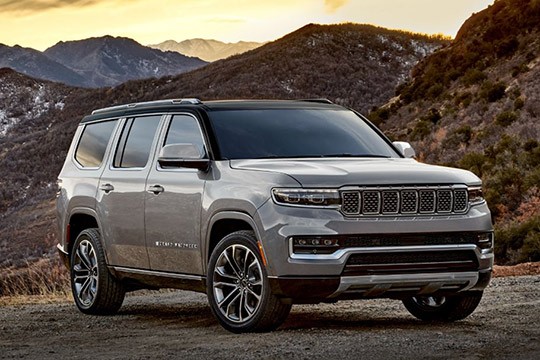