Bicycles, especially e-bikes, have seen an unprecedented boost in popularity with the current health crisis and the need for safer, affordable and more socially-distant mobility solutions. But bikes offer no protection against the elements and, as Jon Snow would often say, winter is coming.

As summer is ending, even in milder climates, this means more rainy days. According to a study cited by Canyon, some 45 percent of potential bikers want an alternative that would protect them from the rain, the wind and snow. Consider that most bikers stop riding when the weather takes a turn, and you see the gap in the market that Canyon is trying to fill in.

No bicycle offers protection from the elements, unless the rider is willing to put extra layers on – and even then, rain would get through. This Canyon capsule concept does, and in the process, is able to bridge the gap between bicycles and cars.

Imagine a vehicle that is electric, fast(ish), with good range and is something like a cross between a bicycle and a car. As such, it’s spacious, more stable, better suited for both street traffic and dedicated bike pathways and, more importantly, roofed. The Canyon capsule is all that, and it represents Canyon’s take on the future of urban mobility.

Unveiled on the occasion of the launch of two new city e-bikes, this capsule concept is more of a study into the general direction Canyon would like to go in terms of future urban mobility. It could be turned into an actual product farther down the line, Canyon hints, but there are no concrete plans in that sense right now.

Sure, the idea is not new: efforts to bring to market something that would sit at the border of bikes and cars go back many years. In recent years, with the push towards electrification, we’ve seen plenty of NEVs (neighborhood electric vehicles) being developed, but they lean more towards cars.

This Canyon capsule is a bicycle at heart: you have to pedal it to get around. You still get motorized assistance, which you will need if you ever want to take it on busy city streets. The idea is that you ride it in traffic like you would a car and then, when you come to a traffic jam, you can bypass it by hopping on the bike path.

It is the “ultimate day commuter,” Canyon says. “It’s fast and stable enough to fly down the open road, yet light and agile enough to slide into the bike lane when things get backed up.”

The capsule was designed with assistance from the Technical University of Aachen and uses the laidback recumbent e-bike model but adds a roof for weather protection. In the back, there’s space to add a child’s seat for tandem riding, or to carry extra luggage or groceries. Access into the cockpit is done by sliding the capsule, with Canyon saying that you could even ride inside with it in half-open position, which would be the closest thing to driving in a convertible. Well, you know, without actually being inside a car.

In addition to the pedals, the rider would have steering on either hip, in the form of joysticks. Turning radius for the capsule is 7 meters (22.9 feet).

“Combining the next generation of lightweight and powerful e-bike design with four-wheel stability and storm-proof protection from the elements, our Future Mobility Concept represents a decisive step in re-imagining how bicycle technology can reclaim space on the streets,” Canyon says. “It is a clean vehicle, a statement, and a sign of what’s to come.”

One day, it might even become reality, Canyon also hints without making any type of commitment by stating it out loud. 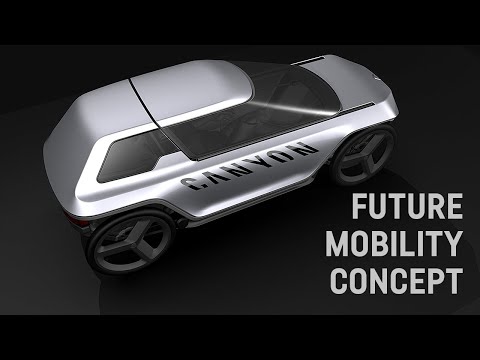