5 The Terra Wind Amphibious Motorhome Is Most Luxurious, Crazy Way to Vacation
Car video reviews:
Up Next

The pull of the past is stronger than ever, and the feeling that humanity is heading for the worst could have something to do with it. If you’re feeling it, too, here’s one way in which you could give in to nostalgia, while also making your daily life if not better at least more interesting.

The Amphicar 770, a Long-Lost Dream, Could Be the Perfect Vacation Vehicle

August is Travel Month on autoevolution, and no conversation on ideal vacation vehicles could ever be complete without mentioning one of the strangest, most promising and still wildly popular vehicles ever to be mass-produced: the Amphicar. The Amphicar was how one man in the late ‘50s imagined the perfect family vehicle, one that could drive on land and then double as a boat whenever it reached a launch ramp.

In theory, it was – and is – perfect, combining two vehicles in one for more versatility, more fun and considerably less fuss. It could still be all that, if you’re willing to take up a new project, invest time and money in it, and then settle for something that’s neither an outstanding car nor a particularly impressive boat. But you would undeniably get a piece of history, a conversation starter, and a most unique vehicle that, according to owners, is worth all the trouble you’re about to get into.

The Amphicar is, to this day, the only amphibious vehicle to be mass-produced in its relatively short run between 1961 and 1968: 3,878 units were built during this time, 90% of which were sold exclusively to the United States. Designed by ex-racing driver and designer Hans Trippel in Germany, the Amphicar was built by Harald Quandt and manufactured at his Karlsruhe Augsburg AG (IWKA) industrial plants in Berlin and Lubeck.

The Amphicar is 100% German by birth, born out of Trippel’s desire to take over the automotive market based on a model he’d already seen deployed successfully in the military. So confident was he of the success of this first amphibious vehicle for the civilian market that he estimated a 20,000-unit production per year. He might have gotten it, too, but life had other plans.

What eventually ended Trippel’s dreams and the Amphicar was Quandt’s sudden death in 1967 (in a plane crash), and the new EPA and DOT regulations on car imports that came into effect in the U.S. in 1968.

With a body made of plain-carbon steel, the Amphicar was offered in four colors: white, red, blue and green. It looked like a car but had the underbody of a boat, so everything was sealed for protection against water. Officially called Amphicar Model 770, it drew power came from a 1,147cc inline-four Standard SC engine sourced from Triumph, which delivered 43 hp at 4,750 rpm and was placed in the back. The name came from the fact that it traveled at 7 knots on water and 70 mph (110 kph) on land. One of the original ads for it claimed that “it drives like a boat and it sails like a car,” which is an accurate (and ironic) assessment.

Dual Hermes transmission allowed for traveling on water and on land. When on water, the engine powered two nylon propellers under the car, with the front wheels acting as rudders. Sailing, you only had the option of forward and reverse, but on land, you got four gears plus reverse on a manual transmission. Launching it from a boat ramp was a simple question of turning on the propellers and driving it into the water. The Amphicar cult following is still going strong
The Amphicar died a sudden and very quick death in terms of production, but it’s still very much around these days. Surviving items are very hot with collectors, regardless of their condition, but we should note that a fully-restored and/or low-mileage example can sell for upwards of $100,000. Replacement parts can still be purchased through Gordon Imports from California, which bought the remaining inventory when Amphicar Corporation went bust in 1968.

To be sure, Amphicars still surface on the used market with some regularity. Right this moment, one is being sold on Bring A Trailer: it’s not in the best condition, but it runs and drives (and floats), has seen some restoration work, and has been fairly well maintained. Turn it into your next project and you might just have the perfect vacation vehicle, one that is certain to bring you plenty of attention and good vibes.

In the U.S., the Amphicar community is strong, too. Collectors often hold regular Amphicar “swim-ins” and meet virtually on forums to discuss ongoing projects or maintenance-related issues. So even if you won’t be able to drive or sail too comfortably or too fast in it, at least you’d be welcome in a community of like-minded individuals always ready to help you out. And you’d literally own a piece of automotive industry, no matter how strange. 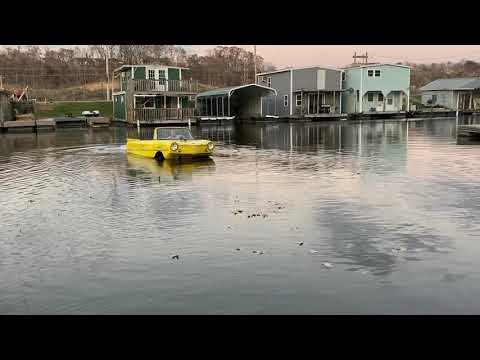 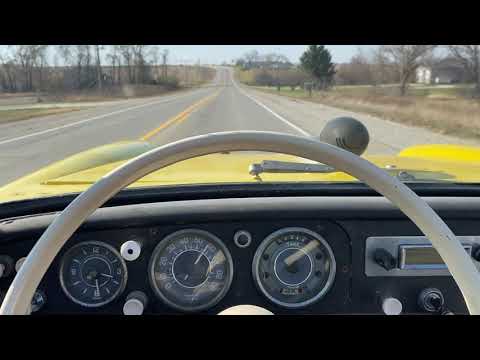 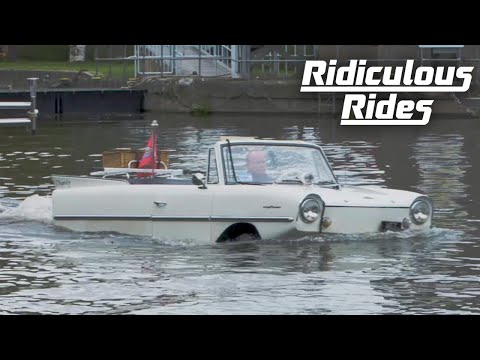