That Tiny Bright Dot Is the James Webb Telescope, Almost One Million Miles Away From Earth

Back in 2013, the European Space Agency (ESA) launched a deep space observatory called Gaia. Tasked with performing astrometry, it deployed itself one year later at a distance of 1.5 million km (932,000 miles) from Earth, at a location scientists call Lagrange point 2 (L2).
10 photos

For most of the years that have passed since, the spacecraft has been alone out there, until earlier this year it was joined by one of the most expensive and most capable telescopes we humans ever made, the James Webb.

By 'joined' we don’t mean the two are next to each other, of course. You see, the Lagrange points, places in space where gravitational forces from a celestial body exactly balance the centrifugal force, are surrounded by large areas with pretty much the same properties, helping spacecraft stay pretty much still for whatever observations they need to do.

So, although technically in the same neighborhood, Gaia and Webb are still a great distance apart. On February 18, for instance, the distance separating them was of 1 million km (621,000 miles), and that was seen as an opportunity for the older spacecraft to snap a photo of Webb.

Released this week by ESA, the photo Gaia took shows an edge-view of Webb’s sunshield, but because at the time when the pic was taken very little reflected sunlight came Gaia’s way, Webb appears “as a tiny, faint spec of light in Gaia’s two telescopes without any details visible.”

Even so, having a chance to see a human-made object far out in space, as perceived by another one, is not something that comes across very often, and will certainly make it into the space exploration history books.

Technically, Gaia is not geared to take photos of celestial objects, but can make “very precise measurements of their positions, motions, distances, and colours.” For this Webb task, it had to use something called a sky mapper, a piece of hardware that scans a narrow 360-degree strip around the entire celestial sphere. 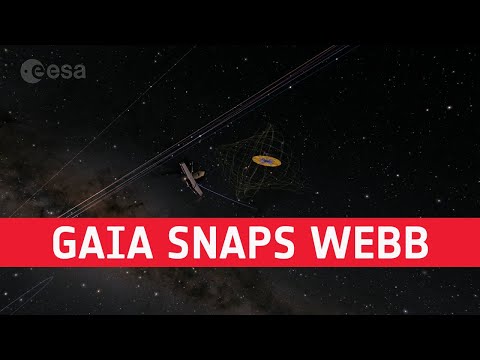