4 Bette Davis Owned a Shelby GT ... And it's Available for Sale

5 Camaro Comes to Europe
Car video reviews:
Up Next

When it comes to engines and horsepower figures, there’s nothing like high-displacement we always say. Maybe that’s why we love American muscle, especially if the mill has a supercharger on top.
1 photo
Sure, we’d like the supercharger to sit on a Hemi, but we’re not that picky. Oh wait, we just found one! As you might have already noticed, the orange Dodge Challenger SRT8 depicted above is no ordinary production vehicle. The Mopar went through Craven Performance & Off-Road’s garage in Missouri for an engine makeover that turned the already power-grunting Hemi into a monster.

A 572 cubic inch monster that is! Yep, that means 9.4-liters of engine, bigger than what the Dodge Viper sports under its long bonnet. Craven Performance says the Challenger can deliver in excess of 1,200 HP and, surprisingly enough, claims it’s street legal in Missouri. To put it simple, it’s a street legal dragster.

Recently completed, the vehicle is not yet ready to race, but it was showcased by its builder at Mega Mopar last month. Just scroll below to hear that insane engine roar. 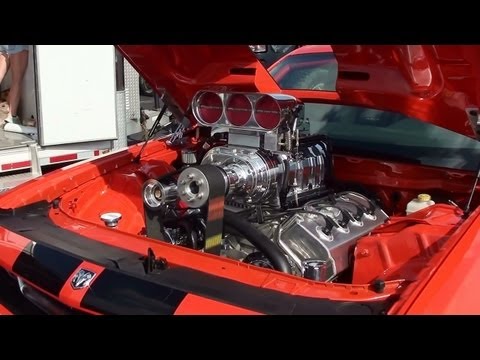