Should Audi Build an RS3 Cabriolet?

Audi really took a gamble when it decided to use Golf underpinnings and launch its first generation A3. But just look at how far they've come. Demand for entry-level luxury has grown by half since last year and the compact car is now one of their most popular models because it's not actually one car, but four: 3-door, hatch, sedan and convertible. Add to that a few hot versions and you begin to understand why there's an Audi for basically everybody.
1 photo
Since the last generation, the Mk2, Audi also offers a compact RS model. It was launched as a limited edition car with a 2.5-liter five-cylinder turbo engine and quickly became a fan favorite. So should Audi take yet more risks and launch even more RS models with the newer Mk3?

The model we submit to be judged today is the RS3 Cabriolet, something that doesn't yet exist, but has come to like thanks to renderings by Theophilus Chin. The graphics manipulator has combined the S3 design with different elements shown on a recently unveiled concept called the A3 clubsport quattro. Since the A3 cabrio and sedan are more similar to each other than to the hatchbacks, the bumper graft is seamless.What Will Power It? 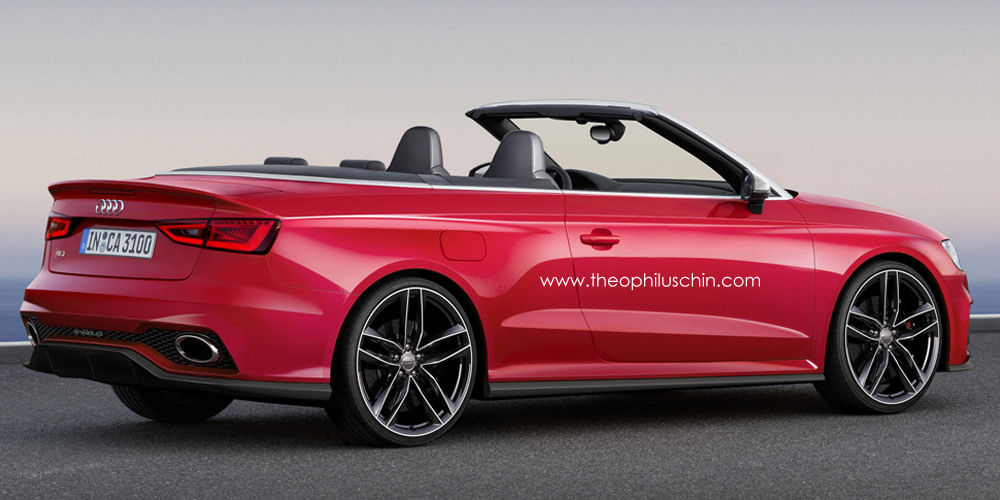 Audi has been working hard to make the 2.5-liter TFSI an EU6 compliant mill by improving fuel injection and cooling systems. We believe the turbo-5 will stick around, with the most recent reports indicating it will now make 367 hp, 27 hp more than the old RS3 and 7 hp more than a TT RS plus.

However, speculative reports coming out since this March claim the 2.5L is being ditched for a smaller 2.0 TFSI. It would make sense from a development point of view, but the fact that Audi still used a five-cylinder engine for its most recent concept indicates otherwise.How Much Will It Cost?
Money is the biggest hurdle facing the RS3 Cabriolet. At the end of the day, it's just an Audi A3, but it will be extremely expensive, comparable even to an S5 Cabriolet. Audi currently offers the S3 drop-top for a whopping €48,500 in Germany, almost €10,000 more than a normal S3 hatch. You do, however, get the LED headlights and S tronic twin-clutch gearbox as standard.

Is anybody prepared to pay €55,000 on a small performance Audi? And does anybody even want performance from a convertible? That's for us to ask and Audi to find out.What Do the Germans Think?
For now, it's a "no bueno". Only the RS3 Sportback 5-door has been approved for production and is undergoing road testing. Sadly, that kind of rules out an RS3 for the US market, since hatchbacks are unpopular here. It's for this very reason that Mercedes developed the CLA 45 AMG and didn't rely solely on the A45.

However, there really isn't a good reason why they can't make more RS3 models. Compared to the underpowered RS Q3, a convertible or sedan seem like a much better idea. Cars like the M3 Cabrio (now an M4) and Audi's own S5/RS5 have proven the market clearly exists, so why not take advantage of it with a cheaper model?