Rugged E-Scooter Is All the Rage in India Right Now, Sells Like Hot Cakes

The Rugged electric scooter is absurdly touted as the strongest EV ever by its manufacturer, but bragging aside, the two-wheeler is selling like hot cakes in India.
6 photos

eBikeGo launched the e-scooter two months ago and bookings for it are still insane, totaling around $130 million so far. With a name that clearly aims to stress its strength and powerfulness, the Rugged scooter has rather an average design, nothing you haven’t seen before on any street in India. It comes with a V-shaped high-strength steel frame and you can order it in several colors.

eBikeGo boasts on the scooter’s water- and dust-resistant hub motor, claiming it’s India’s first indigenously built one. There are 12 built-in smart sensors and an LCD display on the Rugged. It is also equipped with LED headlights, taillights, indicators, and a USB port. You can also opt for a cell phone holder.

The Rugged e-scooter packs a water- and dust-resistant (IP67 rated) swappable battery with a capacity of 1.9kWh. There are two versions available with the vehicle, the Rugged G1 and Rugged G2. The G1 offers ranges of up to 80 km (approximately 50 miles). But the G2 doubles that range to a whopping 160 km (around 100 miles). Four hours are required for the Li-ion battery to be fully charged.

All the features of the scooter are accessible via the dedicated app which allows for over-the-air operation. You can unlock the scooter through the app and remotely monitor and control the vehicle. There are a variety of features included such as GPS tracking, an anti-theft system, vehicle performance parameters, and more. 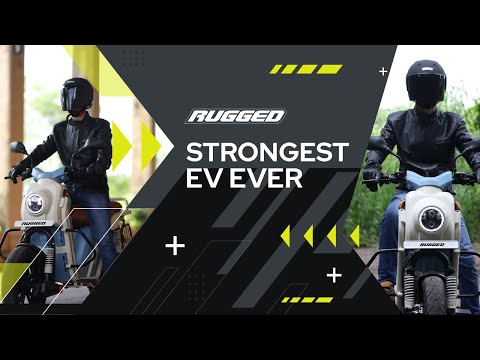