Rough Riding A Victory Octane In The Desert

The new Victory Octane wasn’t meant to be a garage queen. You should go out and spank the bejesus out of it because it’s properly built to even withstand the abuse of a stunt rider out in the desert.
5 photos

Yes, stunt rider Tony Carbajal and his teammate Joe Dryden, both rode the Octane earlier this year to set a Guinness world record for the longest burnout on such a bike.

Joe achieved the performance while Tony continued to explore the motorcycle’s capabilities. In his vision, that meant taking the sport cruiser out in the desert to abuse it, recording everything in a vlog-style video to showcase what it can do.

“It was kind of a Mad Max theme,” Tony explains. “Unleashing some of the Octane’s fury upon the desert. It has been my goal to show what Octane is capable of right out of the box with little to no modifications. Whether it be a Guinness World Record burnout, action packed stunt shows, a cruise through the canyons or racing across and jumping in the desert. Octane is a very capable machine.”

Jumps, wheelies, drifting in the sand, falls, fine dust everywhere? The Victory Octane appears to be enjoying the Mad Max scenario. It’s quite crazy what you can do with a cruiser, and you can see it all in the video below and the attached photo gallery. 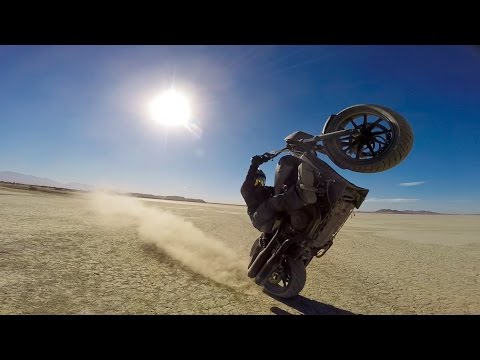