A truly impressive piece of American (automotive) history has come up on the market: one of Al Capone’s cars, a fully-armored 1928 Cadillac Town Sedan with little mileage on the clock and in excellent condition.
10 photos

Now’s your chance to roll like a mobster, if you have $1 million to spare. Celebrity Cars Las Vegas is selling Capone’s Caddy, believed to be one of the first armored cars in history. The detailed history of the vehicle explains how Capone himself paid for the armored job on the body of the car at a local auto parts shop.

Asbestos-wrapped steel plates weighing about 3,000 pounds were inserted into the car, after being delivered to the shop with bullet traces on them from proving tests. Prior to that, Capone also saw to making the windows bulletproof, adding other customization options that allowed occupants to engage in a full shut-out with pursuers.

These include the possibility of dropping down the rear window or rolling up the rear side windows, to reveal a circular hole through which passengers could fit Tommy guns. Moreover, the car includes a police radio station and a police siren under the hood, and was painted in the local police colors, which added to the element of surprise in case of an attack. To Capone’s advantage, of course.

The modified V8 engine is capable of reaching top speeds of 110 mph: this is another modification that Capone required to ensure he always had the upper hand in a direct confrontation with his enemies.

It is believed the mobster bought this Town Sedan from longtime partner Emil Denemark, who also supplied him with two other V12 Caddys that were later seized by the feds. This one slipped through the cracks as Capne is believed to have shipped it to Chicago, where one of his agents tried to sell it off without the feds’ knowing.

A family bought it thinking they could make a living by displaying it, but they only kept it for a year. After that, the Town Sedan was shipped to NYC and then to England. It eventually ended up in Canada, with an owner that undertook a “comprehensive restoration” process, during which most of the armor plating in the body was removed.

“The 1928 Cadillac is in excellent cosmetic and running condition,” and is being sold as-is. Celebrity Cars says. The asking price is of $1 million, with a $20,000 deposit prior to negotiations. 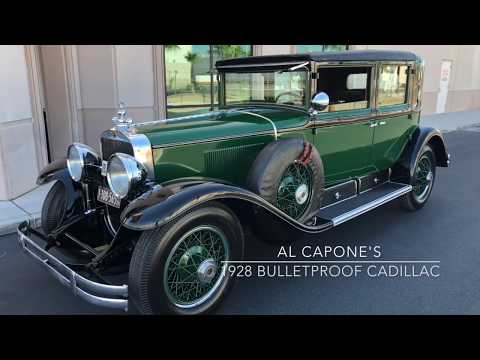