1 Rimac Nevera Driver Does 144 MPH During Public Event, Turns Himself In After

2 This Is What Drifting $2.4 Million in Almost Complete Silence Looks like

Rimac Nevera Is Faster, More Powerful Than Your Dream Car – And That Says It All

In spite of last week’s big unveiling, the Rimac Nevera isn’t quite yet complete. The Croatian company still has to polish a few things, but it is nonetheless the most brutal thing on four wheels you have ever experienced.
7 photos

Not only that, but with a claimed 0-62 mph (0-100 kph) in 1.85 seconds, it is also the fastest production car out there. So, if you ever win the lottery and want something that could smoke everything, then you know that the Bugatti Chiron, Koenigsegg Regera or upcoming Tesla Roadster aren’t the best choices in this department.

Previously known as the C_Two, the Nevera, which is what Croatians call the unexpected and dangerous Mediterranean wind that usually lasts for 1-2 hours, uses four electric motors, one for each wheel. Fed by a 120 kWh battery pack, they generate a combined 1,914 HP and 1,740 lb-ft (2,360 Nm) of torque.

Homologated for road use anywhere in the world, unlike other modern hypercars, the Rimac Nevera has a simple and youthful cockpit design. Ingress and egress is facilitated by the large opening doors, and once inside, drivers will look at the multi-function screen in the middle of the dashboard, and the digital instrument cluster through the three-spoke steering wheel.

Build quality is up there with the finest rides, and you also get a few storage spaces – just don’t expect to haul any unnecessary items. Future owners will also have to pack extremely light if they want to use the Nevera for a weekend getaway, because there is no frunk, and the trunk can only hold 100 liters (3.5 cu-ft).

So, what’s the driving part like in such a quiet beast? Does it live up to expectations in terms of steering, braking and suspension, or does it need some more fine tuning in those departments too? CarWow had another go in the Croatian hypercar that starts at €2 million (equal to ~$2.4 million) before taxes, and here’s what they had to say about it. 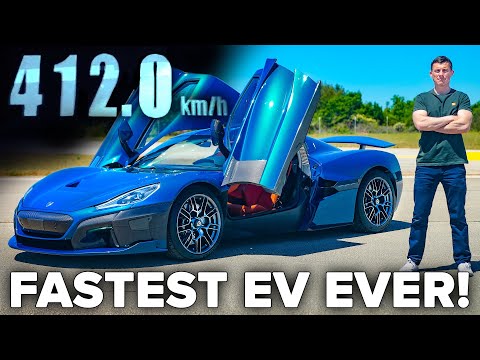