Mihnea Radu
Carwow was among the very few to put together a big drag race of European pickup trucks a while back. They're not as popular as in America, and most of them are "compacts" with relatively small diesel engines.
2 photos

The VW Amarok won that convincingly because it brought a V6 gun to the four-cylinder knife fight. We noted that at the time and so did the people in the YouTube comments. So a re-do was decided for this amazing drag race scenario, this time with the legendary Ford Raptor models.

The Amarok still has a 3-liter TDI making 258 horsepower and 580 Nm of torque. But this time, the Mercedes X-Class also brought along its V6, which is good for 258 horsepower as well, but only 550 Nm.

In Europe at least, the Ranger Raptor actually looks unprepared, packing only a 2-liter bi-turbo diesel with 211 horsepower and 500 Nm of torque. So the faith of Raptor fans is better placed with the big F-150. One quick look at the grille reveals we're dealing with the older model, which had a naturally aspirated 6.2-liter V8 with 411 horsepower and 585 Nm (when converted to metric HP). That's almost twice as much as the little Ranger. Then again, the gearbox is outdated, but it's not like VW or Mercedes programmed lightning shifts into their utilitarian vehicles.

So what happens? Well, it's kind of embarrassing for the Raptor boys. The Ranger is dead-last, while the F-150 just barely stays with the X-Class. The VW Amarok sails to a convincing lead, proving diesel engines still have a part to play, at least in utility vehicles. Obviously, drag racing is pointless, but the outcome reflects which of the trucks would feel the slowest when fully loaded.

Normally, we don't feel like talking about the brake test. However, the stopping power of the two Raptors is so bad that we think they're unsafe to drive. 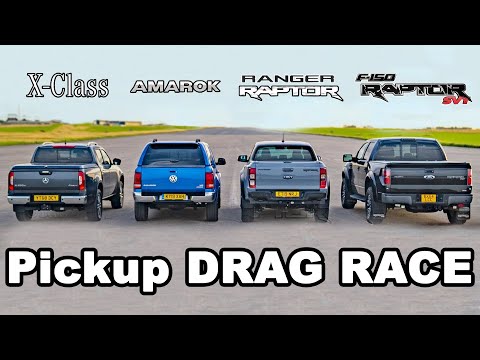