4 Honda Accord 2.0T Races Mustang GT, Loser Has “Dude I Almost Had You” Moment

The RoadStock Hellcat, Or How on Earth Does a Mopar Get Powered by Rye Whiskey?

Make no mistake about it: the Audi RS 3 Sportback is a very quick car. In its highly contested segment of super hot hatches, it's second only to the Mercedes-AMG A 45, and if you know anything about that model, you also know there's no shame in taking the runner-up spot.
8 photos

The only way the Audi could win this race is if they kept going down the track until the Porsche ran out of gas. However, the guys at YouTube channel Motor have a much better idea: how about staggering the standing start to give the Audi a fighting chance?

You could use physics and, based on the manufacturer's official numbers, come up with the exact gap needed to make the two cars cross the line at the same time. However, there are two problems with that: one, those numbers have nothing to do with the reality of a wet track on a winter's day in Australia, and two, you probably don't know the formula to calculate that anyway.

Besides, where would the fun be in that? Guesstimating is a much more entertaining way of doing it, so it's precisely what the two hosts go for. They start with a relatively conservative distance of 40 meters (about 131 feet), though the drone shot suggests to us it may be less than that. Anyway, 40 meters or less, it was clearly not enough.

Time to put the two cars further apart: 60 meters (~197 feet). Considering the finish line sits at 400 meters (~1,312 feet, though you could round it off to 1,320), that's a huge chunk of the race the Audi gets to skip. The guys admit they don't have any precise measuring devices, so the numbers are orientational at best. Is this greater distance of unknown real value enough to make the finish any less obvious? Nope, it's not.

They move on to 70 meters (230 feet), and it feels as though they've hit the sweet spot. Funnily enough (not for the Audi or its driver, though), the Porsche still wins it, but it's the definition of a photo finish. So, there you have it: if you're in a Porsche 911 Turbo and you want to catch an Audi RS 3, as long as it's 70 meters or closer when you both set off, you'll get in front within 400 meters. We can't see any practical application for this information, but you can never know.

Not contempt with the humiliation they had already subjected the RS 3 Sportback to, the guys decide a 30 mph (50 km/h) rolling race was also in order. With no massive head start - or any head start, for that matter - you can imagine how that went down. 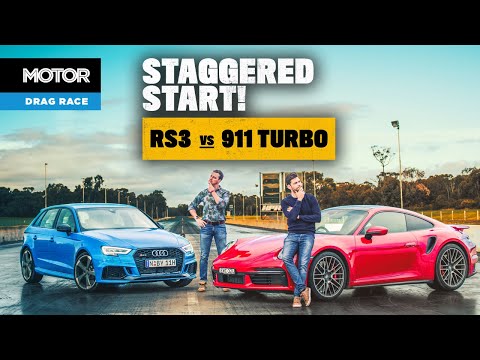