You Really Don’t Need Android Auto on a Bicycle

Home > News > Moto
Daniel Patrascu
Ever since its introduction to the market five years ago, the Polaris Slingshot has become one of the worthwhile choices for people in the market for a three-wheeler. Partially responsible for this is the fact that each can be customized beyond recognition.
8 photos

In fact, nearly all Slingshots presently on the road are changed in some way or another, and that’s because they were built with precisely this goal in mind. Even its maker likes to say that “seeing a stock Slingshot is like seeing a bird without feathers.”

This is why over the years Polaris has launched two customization choices to go with whatever the customers have in mind for their ride: the Weekender and Premier Series. As March 2020 drew to a close, a new one was added, the Design Series.

Described as an all-new accessory collection for the 2020 Slingshot, Design brings a host of unique touches aimed at transforming each ride “into the ultimate form of self-expression.” What that essentially translates into is a number of colors that can be applied on the front grille, belt guard cover, lower hoop, and other elements of the exterior.

“Creativity is about doing things differently, and finding things in life which give you that fresh perspective is the biggest challenge, but when it happens, it’s automatic,” Polaris says about the new customization option.

“The Design Series allows you to use your creativity to transform your ride into the ultimate form of self-expression."

The Polaris slingshot currently sells in four versions: S, SL, R and Grand Touring. All versions are powered by the same 2.4-liter engine linked to either a five-speed manual or an automatic transmission. Prices start at $20,999 for the S and at $30,999 for the Grand Touring.

Because of it’s three-wheeled configuration, it is classified as an Autocycle in 47 American states, but it can also be registered as a motorcycle in various regions. 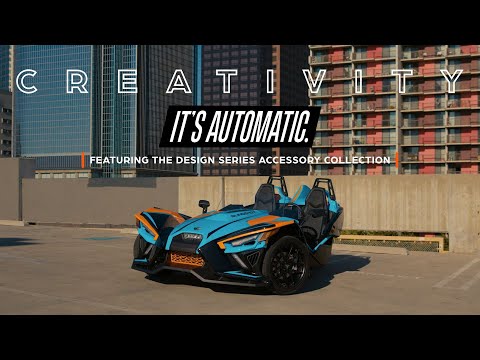