3 Nissan/Infiniti to End Their Partnership with Red Bull Racing

Nissan Teases the “Fuel Station of the Future” and the Thing Is... It’s Kind of Invisible

Nissan is still riding pretty high on the initial success of its LEAF EV thanks to which its battery-powered small car is still the best-selling vehicle of its kind in the world.
1 photo
Not that it’s facing such stiff competition, to be honest, but that might change once Tesla comes up with its more accessible model it’s been threatening us with lately. But we’ll get to that when the time comes.

Naturally, having the most successful EV in your portfolio and making statements about its importance in your company’s long-term goals obliges you to show a lot of interest in all the connected activities that come with the territory.

Building a great electric vehicle is nice and all that, but unless people see them as something useful, nobody’s going to touch them with a ten-foot pole. Just look at the early years of the EVs and you’ll get a pretty accurate picture.

Developing the infrastructure had been a very important side-goal for all the manufacturers that had EVs in their ranges, but the fact that the automotive industry doesn’t seem to have agreed on whether batteries or hydrogen fuel cells are the future doesn’t really help with hasting things up. For the moment, though, it’s easier to find a charging station than a liquid hydrogen pump, so let’s say that one solution has the upper hand over the other.

However, those people at Nissan managing the electric division can’t be happy with how things are going outside their company, so they have asked the Foster + Partners architecture agency (of London’s Gherkin fame, but also the zero-emission Masdar City in the UAE) to imagine the fuel station of the future.

It shouldn’t surprise anyone that the emphasis is put on wireless charging, especially since it’s only been a few weeks since Nissan announced a 7kW wireless charging device that could be used to replenish overnight the future 60kW, 500 km (310 miles) battery the Japanese brand is currently working on.

Still, asking one of the most innovative architectural practices to design a wireless charging point that sits hidden under the asphalt doesn’t make much sense, so we should take Nissan’s word on it and expect more on the subject in the future. 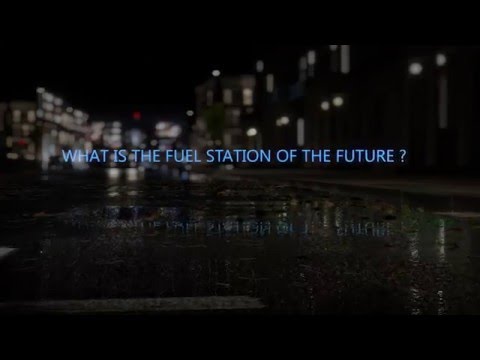