The Japanese automaker introduced the third generation of the Versa in 2018, and sales started well, but then, in 2020, when the pandemic situation shut down the industry, it went through difficult times.

Yet, Nissan didn't collapse and continued producing the Versa, which proved to be a very effective solution in the affordable car market. That made it a top seller in its class, and Nissan tried to keep the momentum. So, after four years on the market, it was time for an upgrade.

For the 2022 model year, the Versa came fitted with more standard options and an improved front fascia. While the S-trim level, the lowest, was still difficult to differentiate from its predecessor, the higher grades were easier to identify. Starting with the second grade, the car sported 16", two-tone, alloy wheels with an option for a set of 17". At the same time, the top-shelf version SR received chromed trims on the outer sides of its four-slat grille.

Inside, Nissan improved its features. Even the S trim level got a standard 7" touchscreen display atop the center stack. As an option, the automaker offered Apple CarPlay and Android Auto, starting with the S-Plus grade. Another essential upgrade was on the safety side, where all vehicles received better systems, such as Automatic Emergency Braking and Lane Departure Warning. The list continued for higher grades with Blind Spot Monitor and Rear Cross Traffic Alert. The 60/40 split-folding rear bench was standard on the entire lineup but the S-grade.

Yet, there were no changes under the hood, where Nissan relied on the same 122 hp (124 PS) 1.6-liter gasoline engine paired with a five-speed manual for the S trim level or a CVT for the rest of the range. 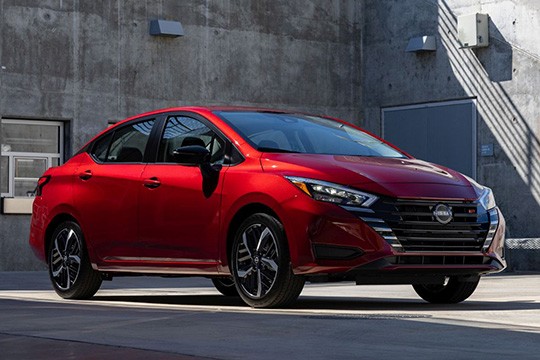