5 Third-Gen Nissan Qashqai Arrives Down Under Solely With 1.3T From AUD 33,890

Nissan introduced another facelift for its supercar-killer GT-R in early 2023 at the Tokyo Auto Show, improving the vehicle's look and refining its ride qualities.

Introduced in 2007 as a 2008 model year, the fifth generation of this Japanese sports car lost the Skyline nameplate and kept only the GT-R. At the time of its launch, it was a huge surprise and proved that Nissan could beat Porsche and Lamborghini at their own games. But, unfortunately, Nissan didn't come up with a new generation for the vehicle in more than 15 years. Instead, it chose to update it and upgrade it little by little.

For the 2024 model year, the GT-R received a new aerodynamic upgrade that improved the car's downforce despite keeping the same drag coefficient of 0.26. That was possible by narrowing the front grille between the bumper and the hood and installing a thinner mesh. Nissan offered the supercar in three trim levels: GT-R Premium, T-Spec, and the GT-R NISMO, which was also the most powerful of them.

At first sight, the vehicle's interior design didn't go through an essential upgrade. Still, the Nappa-wrapped dashboard and the new seats offered a glimpse of the car's new features. Atop the center stack, Nissan installed an 8" infotainment unit that featured Apple CarPlay. In addition, for specific markets, it also featured satellite radio. To further enhance the sound, Nissan worked together with Bose for the 11-speaker system.

Under the hood, the 3.8-liter twin-turbocharged V6 produced 565 hp (573 PS), which it sent in all corners via the acclaimed ATTESA ET-S all-wheel-drive system. 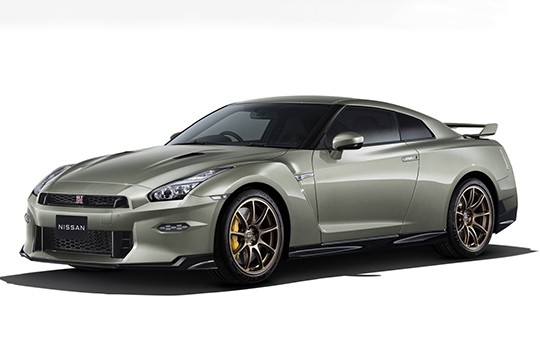