5 New Mercedes-AMG A35 and A45 Show Design Differences, Sound Good
Up Next

Home > News > Car Profile
Mihnea Radu
Australia has gone from the home of utes and V8 sedans to a country in love with hot hatchbacks, Japanse cars, and crossovers. We're not surprised to see a compelling comparison between the new Renault Megane RS and two of its rivals coming from Down Under.
2 photos

Since the Focus RS is no more, this clip is slightly irrelevant, but we doubt any fan of this segment would mind seeing how the downsized Renault stacks up against this goliath of hatchback performance.

As you might have heard, the Megane RS is chasing the GTI with, among other things, a smaller 1.8-liter engine, all-wheel steering, and an available twin-clutch auto. It's also the classiest car here, especially compared to the gaudy Civic Type R.

In terms of horsepower, we feel obliged to "translate," since Australians use the kilowatt system. Metrically speaking, the Megane RS makes 280 HP and 390 Nm of torque, followed by the Civic with a 2-liter packing 320 HP and 400 Nm and the 2.3-liter Focus with 350 ponies and 440 Nm.

If you're looking for a wagon but want something more exciting than the Octavia RS, definitely go for the Civic. It's got a ridiculously large trunk for this class of car. The Megane is just... normal, but the Focus RS is downright small in this regard. Right, enough of the boring stuff!

The Aussies subjected all three to a lap time test. The Focus RS came first and it would have been faster were it not for the Cup 2 tires being bad in the rain. The Civic Type R came a very close second, but the Megane was four seconds off, with complaints including weird steering and clutch action.

So what about on the road? Well, once again, the Civic shines. Honda did a much better job with the suspension, making it super-sharp but never uncomfortable. It also scores points for the superior shifting feel.

There are things that the Megane does better too. For example, its engine feels more responsive, especially around the middle of the rev range, while the sound encourages you to go faster. 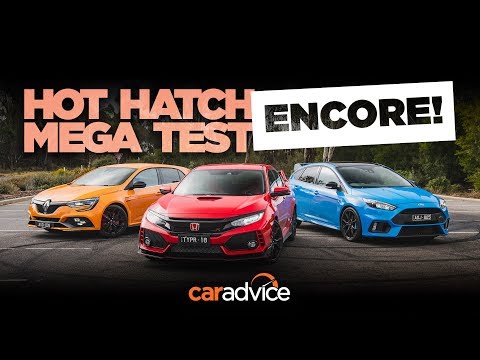