Renault introduced the Arkana in 2019 on the Russian market and, two years later, it adapted it for the European market, making the SUV-coupe available at an affordable price.

While the BMW X4 and the Mercedes-Benz GLC Coupe were true contenders in the SUV-coupe niche market, there was no other carmaker to challenge them. Later on, Audi joined the party with the Q5 Sportback. But all three of them were in the premium segment, with prices that were high above the mass-market products. Then, Renault considered that it could offer something similar, at a fraction of a price.

The French carmaker already had a very successful platform used for the Dacia/Renault Duster. It used it to build the Arkana and sold it to Russia. After it saw the results, it transformed it into a Euro6d product to comply with the European Emission regulations and introduced it in 2021. Its design was a mix between a Renault Megane front, with a Megane Sedan profile and a shortened trunk. But the French designers made it even better on the interior.

Renault didn't spare any effort to make the Arkana a market conquerer. After all, it was the first mass-market SUV-coupe with four doors. It featured a leather-clad interior for the upper trim level, while the base version featured cloth seats. Renault already offered the R-Link infotainment system and the TFT display for the instrument cluster in the compact-segment, and they were introduced on the 2021 Arkana as well.

Under the hood, Renault offered a choice of turbocharged and hybrid gasoline engines with front-wheel-drive systems. They were paired either to a manual or a seven-speed automatic (dual-clutch) transmissions. 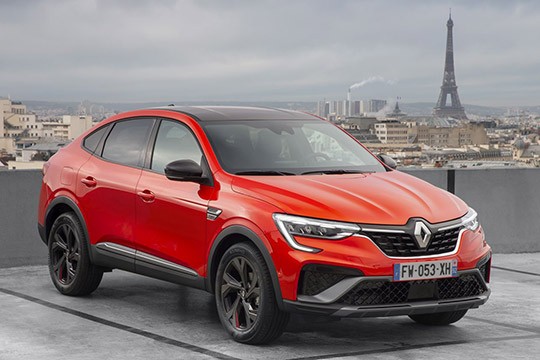