New 2023 Mercedes-AMG C 63 Made Public Debut at Goodwood, Here's How Much Power It Has

The 2022 Goodwood Festival of Speed ended a little over a week ago, and in the multitude of premieres, dynamic debuts, and simply exotic displays, we missed one important presence: the new generation Mercedes-AMG C 63.
11 photos

That’s right, the Affalterbach brand’s rival to the likes of the BMW M3 was actually shown at the UK event, and although it was still dressed in camouflage, it was thin, and thus more revealing. As a result, we can see more of its aggressive design, in the video taken by One Tire Fire on YouTube, which will set it apart visually from the latest C-Class models.

For one, the front bumper looks beefier, with the bigger air intakes and Panamericana grille. The profile is muscular, and out back it has a mean-styled bumper, with integrated diffuser. Here, Mercedes-AMG chose to retain the quad-pipe layout, despite significantly downsizing the engine. More on that in a moment, as we also have to tell you about the trunk lid spoiler and wheels, which are also exclusive to the new C 63.

Now, back to the engine, which is a turbocharged 2.0-liter four-cylinder unit, as everyone and their grandmother knows. Lifted from the ‘45’ series, it develops 470 horsepower, and it is backed up by an electric motor mounted at the back that generates 201 hp. A sign next to the car reveals that it has a total of 670 hp (680 ps / 500 kW) and 553 lb-ft (750 Nm) of torque, a significant improvement over the sonorous twin-turbo 4.0-liter V8 powering the outgoing C 63.

Since the new four-pot is much lighter than the V8 it replaces, the premium compact sports sedan (and wagon) should handle much better. Nonetheless, that remains to be seen once it premieres, and we reckon it won’t be long until that happens, as we will probably see it with no camouflage whatsoever in the coming weeks/months. 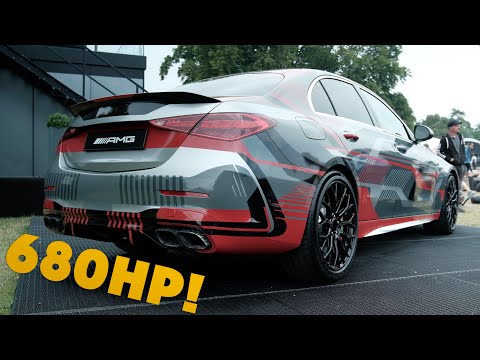