3 BMW and Mercedes Sitting in a Tree...
Car video reviews:
Up Next 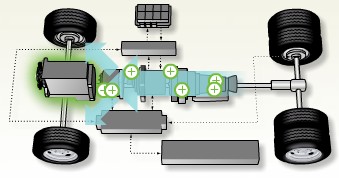 Given today's fuel prices, both for diesel and petrol, people want cars with the lowest consumption possible and we can't blame them, but what about truck drivers? Regardless of the amount of fine tuning, their massive engines gulp enormous amounts of fuel. Who's taking care of them? Well, apparently Navistar is, because at this week's Hybrid Truck Users Forum in South Bend, Ind., the company unveiled an additional hybrid truck configuration, the International DuraStar Hybrid tractor, which targets general freight haulers and food/beverage distributors.

The Class 7 hybrid tractor is said to provide fuel savings ranging between 20 and 25 percent on a standard in-city pickup and delivery applications.

“Saving 20-25 percent in fuel costs is nearly the equivalent of paying about $2.91 for diesel at the pump versus the national average of $3.88 per gallon,” he added.

The key component behind these improvements is the electric motor/generator between the output of an automated clutch and input of the automated manual transmission. The hybrid-electric system recovers energy during braking, and can add power back into the driveline during start and acceleration. This capability makes the truck more efficient in standard driving, particularly in city and stop-and-go driving.