2 2015 MINI JCW Hardtop Officially Unveiled: Will Show Up at Detroit

MINI JCW What? This Is the Real Go-Kart Experience

1 photo
The third iteration of the MINI Hatchback since BMW took over left some people unimpressed. That’s because due to the modern standards it has to fulfill, it’s a rather bigger and heavier car than it should.

Leaving aside the fact that people complain about such things and then claim that they can’t live without 16 speakers, just increasing the power (like on the JCW version) won’t do enough to get the go-kart feeling back into the motorist behind the wheel.

So what’s the solution then? Well, the guys from XCAR might’ve found it, by accident. They met up with a motosport team that goes by the name of Total Track so you might have a clue about what they do for a living. Yes, they prepare cars for the MINI Challenge. This year, since the new model has a bigger engine under the bonnet, a new category was introduced.

Therefore, the guys had to create a new car and what they came up with is absolutely bonkers as the British would say. One figure should give you a hint of how much has changed: 1,065 kg (2,347 lbs). That’s how much this car weighs.

Stripping it down was just half of the equation though. The guys then added a lot of weight with a roll-cage and then went on to tune other aspects of the car like the engine that now makes up to 275 BHP and 400 Nm (295 lb-ft) of torque or the brakes or the sequential gearbox or even the new wheels.

Everything was rethought to be transformed into a proper racing car and boy, does it look exciting? We’re getting goosebumps only by looking at these videos but we simply can’t imagine how hardcore driving it must feel. Just look at Nick’s face. That’s what MINIs should be all about. 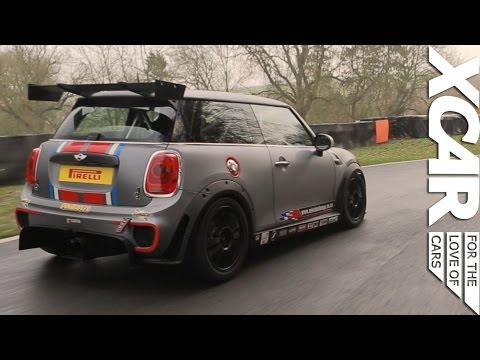