5 2013 Gallardo Plays in the Mud and Snow: Beef and Horses
Car video reviews:
Up Next

Stunt and rally driver Ken Block may have invented Gymkhana (click here for the Gymkhana Six video), but it appears that Pikes Peak champion Mike Ryan has taken the spectacular stunt to a whole new level. And that's because he's an outstanding driver that has a Freightliner semi truck at his disposal.
1 photo
We're talking about the Banks Super-Turbo Castrol Freightliner truck that Ryan raced at the 2013 Pikes Peak, completing the course in 12 minutes 49.211 seconds. That may not sound like much compared to Sebastian Loeb's 8:13.878-minute record, but bear in mind that Ryan manhandled a 5-ton semi.

Mother Nature stopped him from beating his previous Pikes Peak record last year, but we have a feeling he'll be back in 2014 for a new attempt. Meanwhile, Ryan was busy shooting a sequel to the original "Size Matters" Gymkhana style video, having some drifting fun on the docks of Long Beach harbor.

The stunt isn't just about the truck going sideways, but it also features a drifting Nissan 240SX, a Ford Crown Victoria driving on two wheels and two ramps. Yep, you guessed it, the Freightliner isn't only fast and powerful, it can jump too, flying over a row of smart fortwo minicars in the process. 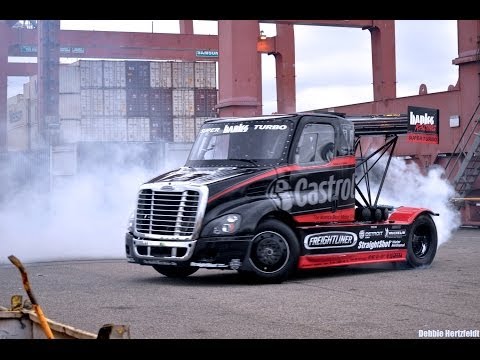