2 Red Bull Will Not Alter RB6 Suspension after FIA Warning 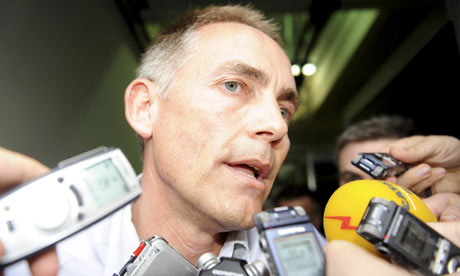 McLaren Mercedes “gently” criticized the International Automobile Federation (FIA) for the way in which they have handled the ride-height saga in recent weeks. As of the Australian Grand Prix this season, the officials of the Woking based organization started suspecting Red Bull of using a special kind of suspension that would adjust itself between qualifying and race, in the parc ferme.

Needless to say, the Red Bull boss Christian Horner quickly dismissed those allegations, inviting the FIA delegate Charlie Whiting to have a look at their suspension system. While the FIA investigators found nothing wrong with Red Bull's system, they did not issue a clear statement on that until weeks later.

In the meantime, knowing that the FIA allows ride-height suspensions in 2010 (or at least favors the system developed by Red Bull), McLaren started working on a suspension of their own back at Woking. According to some reports in the local media, the new suspension would have been debuted in China and would have brought the McLaren's around half of second per lap.

However, only days before the Chinese GP, the FIA issued a statement in which it states loud and clear that ride-height suspensions will not be admissible in F1 throughout the 2010 season, leading to McLaren halting their work on the new suspension.

“It would have been nice if we had had a clear no at the outset but we didn't,” McLaren boss Martin Whitmarsh is quoted as saying by the Daily Telegraph, hinting that his team has spent plenty of time and money to develop a feature that will never be debuted onto the MP4-25 in 2010.