1 Sad Day: Another Lambo Passes Away 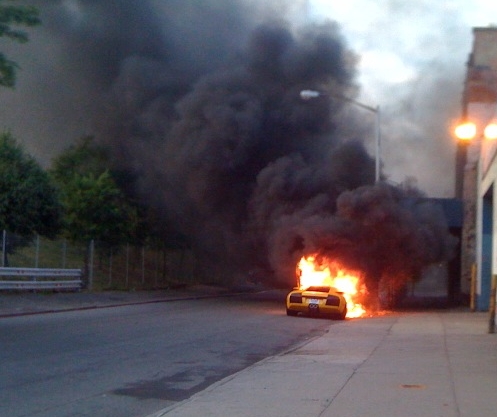 We're not sure what Lamborghini puts into its vehicles, but that something is apparently flammable. Very flammable.

PHOTO update: Shannon Weir, one of our readers, sent us these new photo, showing the Murcielago while in flames. To be served extra crispy...

Another Lambo, a Murcielago, went down in a blaze of glory earlier today in Brooklyn, after apparently two uncaring individuals stole the over $350,000 vehicle and, as the rumor went on Rodney Street, gave the yellow supercar a flaming-red aureola.

The news of the Lambo burning in New York is so hot, we unfortunately are unable to give you any further details on the incident. Rest assured we will do so as soon as other info becomes available. 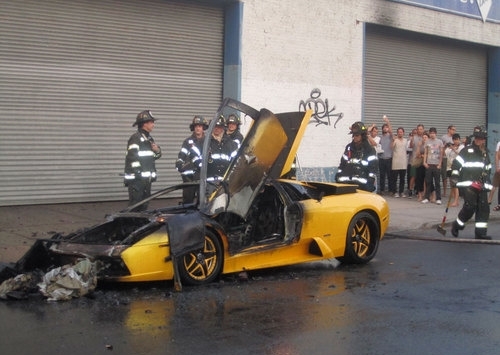 Until then, we remind you this is not the first time this type of supercar goes out in flames, regardless of the reason. The most recent incident took place in the Netherlands this April, when another Murcielago had some flaming issues.

Apparently, a possible cause for this streak of pocket-crippling fires is a defect in the gas tank. Lamborghini has acknowledged there is a problem with the gas tank and already issued a recall this May for 2007 and 2008 model year Lamborghini Murcielagos, whose gas tanks can become detached from the supercar and cause a fire. In all, 248 models are subject to the recall.

Although the Brooklyn fire has not yet been blamed on the gas tank, it's obvious you don't have to go out of your way to set a Lambo on fire. If you don't trust us, then follow this link to CarAdvice and see quite a collection of hot, hot, supercars.