Home > News > Custom Cars
Aurel Niculescu
Introduced with the 1967 model year, the fifth-generation Ford F-Series built upon its predecessor’s architecture with a contemporary design, an expanded cab, and larger greenhouse, as well as more engine options. Still, even when dealing with the flagship Ranger XLT grade, a Coyote wasn’t among the latter.
19 photos

The F-Series was granted access to the Coyote V8 engine line a mere decade ago, but that clearly doesn’t stop classic truck devotees from mixing the vintage lines with modern Ford Performance power. And we have already seen quite a few (re)incarnations of the F-100 line done like this.

Some were more spectacular than others and even capable of doing ghost burnouts (as in, the driver steps out of the cab and the truck continues to burn rubber!). Others were seemingly geared towards the let’s live life with a smile mantra while enjoying the cruise. A few even went down the patina-infused route, hiding more than a few surprises underneath.

But how about a 1971 Ford F-100 Ranger XLT that has all sorts of passions hiding in plain sight? The most obvious one – not only thanks to the license plate reading “DODGR71” – has a lot to do with the inspiration for this custom project.

It turns out the owner of the ‘71 F-100 is a huge Los Angeles Dodgers fan and wanted his Blue Oval to reflect the life-long passion. That came out like a charm, judging by the spectacular two-tone blue and white Dodger-inspired livery.

Better yet, the attention to detail is what makes this sort of build truly unique. Never mind the huge Los Angeles team logo showcased in the bed of the truck because the tailgate immediately caught our attention with its baseball bat-inspired wood-grain panel.

As far as we can understand from the little information shared by the Fat Fender Garage team, which took care of at least part of the work, the looks are decidedly classic while everything else is geared towards everyday performance.

No need to take a hint, because a look at the interior (at the 4:40 mark in the video embedded below) makes everything crystal clear. By the way, the main reason we feature this F-100 isn’t linked to the MLB team.

That’s because after the Fat Fender Garage team wrapped up the installation of a Whipple supercharger to the modern Coyote V8 nestling under the hood, they had no idea how much horsepower was reaching the wheels.

No worries, because the classic dyno pulls quickly came to the rescue. And we got a definitive answer by the time all the pulls and fine-tuning was done: 567.8-wheel horsepower! That's a nice show of strength, considering that the setup wasn’t even maxed out (they mentioned a mere 10 psi of boost) as the owner wanted this custom F-100 as a daily driver. 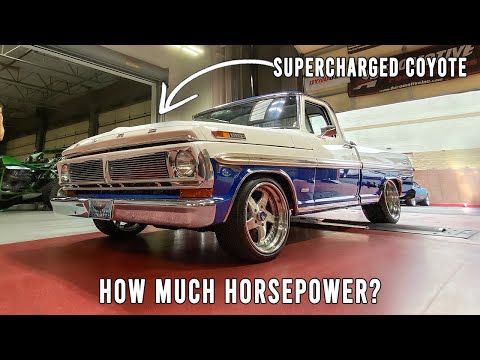