Daniel Patrascu
Drag races are a dime a dozen these days, be it organized and sanctioned, or simply impromptu on a stretch of road somewhere.  That's because a great deal of videos showing the exploits of individuals with cars and smartphone cameras pop up all over the internet each day.
9 photos

But how often do we get to see a motorcycle, a Tesla and a Formula 1 car take on a fighter jet and a private jet, all racing at the same time?

It all went down on Thursday, when the Teknofest Istanbul Aerospace and Technology Festival opened its doors at the Istanbul New Airport.

At the starting grid on the runway sits an impressive collection of vehicles and drivers/pilots. In the distance, on its own runway, sits a Challenger 605 private jet. Next to it, an F-16 fighter jet belonging to SoloTurk, the Turkish Air Force's demonstration team.

For some reason, the two jets in the distance seem to go easy on the throttle at the start of the race, allowing the Kawasaki, F1 car and Tesla to get a comfortable head start. As the race progresses, the Model S falls behind two, leaving the two racers to compete for the win.

The photo finish shows the motorcycle passing the finish line 9.43 seconds after throttling up, and 0.04 seconds ahead of the Formula 1 car, according to online publication Daily Sabah. The duo is followed by the F-16 fighter jet.

You can watch this unusual drag race unfold in the video attached below. 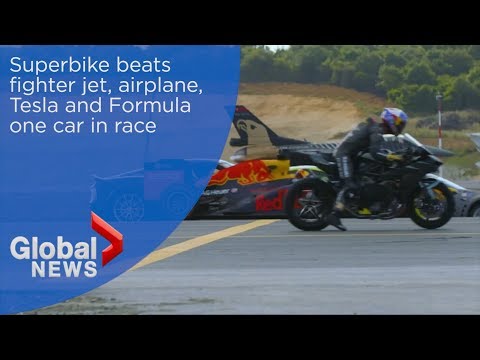