After the successful Evora 400 and 410, the British sports car manufacturer Lotus introduced in 2017 their fastest version to date, the GT430.

Lotus was known for building light and very light sports cars. Their engineers didn't hunt hundreds of horsepower, but they were keen to cut down the weight of their vehicles. For some models, even the interior carpets were offered as an option.

The exterior look of the GT430 is as aggressive as it can be with a big air intake in the center of the front bumper and two air-scoops on the sides to cool the brakes. On the hood, two extracting scoops were installed to help for cooling the radiators placed in the front. On top of the front fenders, a pair of vents helped to reduce the lift from the wheel-well.

Inside, the minimalist design was dominated by sport-bucket seats built on carbon-fiber support. The infotainment system installed on the dashboard was the only modern feature that was on sight. There were few buttons and switches on the center console some simple buttons from Renault car manufacturer and that was it. The only fancy feature was the Alcantara on the dashboard. But that was there to remove the glare and the reflections into the windshield.

Under the hood, there was the same Toyota V6 unit installed in other Lotus cars. It featured an Edelbrock supercharger that boosts the power up to 430 hp and without any turbo-lag. The engine was mated as standard to a 6-speed manual or, as an option, a 6-speed automatic. A limited-slip differential was installed to improve traction and the ESP could be calibrated to allow different slip percentages. 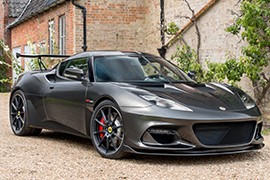