1 It May Take a While but You Will Get Drunk on Teslaquila, Elon Musk Promises

3 Peak EV: Lamborghini Parked at Charging Station Gets Busted by Cop on e-Bike

4 Tesla Full Self Driving Suite Ready by the End of 2020, Level 5 Autonomy Nears

ICEing Is Uncool No Matter Your Excuse, Karen Learns After Parking in Tesla Spot

Elena Gorgan
ICEing is that deeply uncool thing drivers of ICE cars do when they park said cars in a spot reserved for EVs only, since it also comes with a charging station.
1 photo
In case you were wondering, ICEing is uncool no matter the excuse you come up with for doing it. Just ask this Karen from Toronto, Canada, driver of a Hyundai Elantra. She tried them all in the space of just a few minutes.

Available at the bottom of the page is a new viral video that popped up on reddit and reignited the debate on how much entitlement a person can have in order to act this way. Karen, the person in question here, is parked in a spot reserved for Tesla vehicles only, outside a Tesla store across the street from a shopping mall.

Karen doesn’t drive a Tesla and she doesn’t like that she’s called out for taking up a space that is meant for an electric vehicle. So she verbally charges at the person filming her, calling them disgusting for being part of the young generation that has nothing better to do than not mind their own business.

To the (mall?) cops called at the scene, she offers an array of excuses: she’s waiting for someone who’s been in a really terrible accident and is “really bad,” she has Alzheimer’s and can’t handle the extra, unnecessary stress and, when one of the officers points out to the Tesla sign to her, she “can’t see.”

Aside from the fact that a couple of these excuses should immediately disqualify her from ever driving again (ICE or otherwise), the video proves that, no matter one’s reason for taking up an EV-only spot, it’s not going to fly. The video ends with a seemingly defeated Karen heading back to her car to drive off, hopefully with a lesson learned: EV drivers have each other’s backs and ICEing isn’t tolerated.

It’s not cool, either. 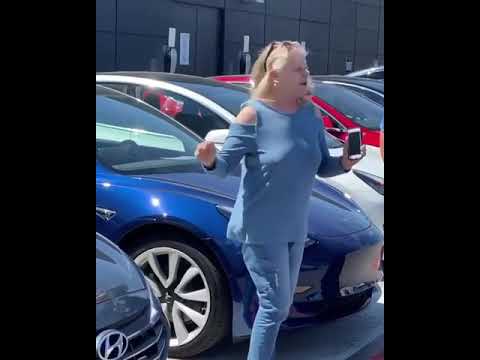