Daniel Patrascu
At the end of this month, the inaugural Drag Specialties King of the Baggers invitational at Laguna Seca Raceway takes place. The event is part of the MotoAmerica Superbike Speedfest, and will see a pack of 12 Harley-Davidson motorcycles competing against each other, and a single Indian Challenger.
26 photos

We’ve already talked once or twice about the bike Indian is cooking up together with S&S and Roland Sands, but what we got so far, officially, were only a few details and a slightly larger number of photos. But with just a couple of weeks left until the event, we finally get a video series detailing “work that both teams are doing behind the scenes as they prepare to take on the field.”

You can find the first episode of this mini-series (we are not told how many of them there will be) attached below. It is more of a presentation of all the people taking part in the build, but we also get some interesting shots (also available in the gallery above) of the motorcycle itself, and some details on how the build is going.

What we knew so far – things like the 122 horsepower, an inverted front suspension, and a hydraulically-adjustable FOX rear shock – are now put into context by the people at S&S, and Roland Sands himself.

As for the one who will ride the bike during the Laguna Seca bagger race, that would be Frankie Garcia. The rider became the youngest athlete to compete in an X-Games motorcycle event in 2006, when he was just 15, and he is presently a member of the Indian Motorcycle-RSD Super Hooligan race team.

“It’s a real honor to have the opportunity to not only participate in the inaugural King of the Baggers race, but to represent RSD on one of only two Indian Challengers in the field,” said Garcia in a statement back at the end of September when he was announced as the rider for the single Indian in the event. 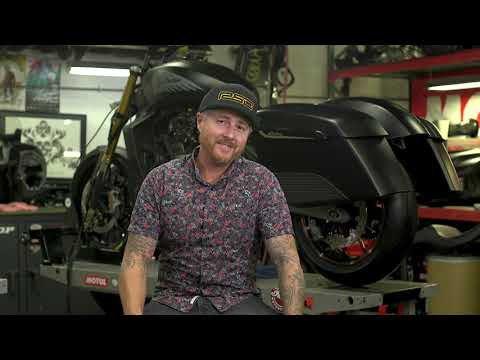